In Your Hat, pt. 12 ⋆ Cladrite Radio
Skip to content
In Chapter 12 of In Your Hat, the 1933 tell-all memoir by Hat Check Girl to the Stars Renee Carroll, she reveals what various celebrities wrote in her collection of autograph books, and she follows that with tales of what the stars of the day liked to eat when they patronized Sardi’s.

I’ve got lots of drawings, too, by famous artists, all of them too risqué for reproduction, and in some cases too combustible for safekeeping. Some of our best known illustrators have garnished the pages of my little books with drawings that would make those paintings on the bathroom walls of old Pompeii quiver with shame.
But not all the good things happen in autograph books or at penthouse parties. I have a lot of laughs right in the restaurant.
If you know Ring Lardner‘s play about Tin Pan Alley, June Moon, then you’ll also recognize Harry Rosenthal, once a band leader and then a pianist who ran away with the show.
Well, it seems that Harry was cu-razy about a certain blonde who was some McCoy in her own right, but who objected, for some reason, to going to lunch with Harry. He asked her more than once, and she refused as steadfastly. Finally, because she thought she could put him off all the way, she said that she would have lunch with him if he would bring a piano to the restaurant some day and play Rhapsody in Blue for her. And she said to herself: “Well, that’s that!”
Well, sir, we didn’t laugh when Harry sat down to the piano to play in his best French, because he came to the restaurant the next day followed by two strong-armed boys who carried one of those apartment upright miniatures between them. He had them set the instrument down in the middle of the floor next to the blonde’s table, proceeded to play the Gershwin tune, and then swung into a group of popular love ditties, all of which were applauded roundly. The blonde approved of Harry and everybody breathed easier.
The next thing we knew we had George Metaxa on our hands. He starred in The Cat and the Fiddle and was a sensation on the London stage in Bittersweet until Paramount brought him across to play opposite Claudette Colbert in a picture.
His press agents tried hard to build him up on his resemblance to Valentino, but it was no go. So they hit on a scheme to make him the best-dressed man in the world. As far as that goes, he probably is, because he came off the boat with eleven trunks and a valet named Quince or something. All the trunks were filled with clothes, and Quince with a nostalgia for England where men talk about horses and dogs and act chivalrous.
Metaxa’s a Roumanian of Greek descent and was in the diplomatic service in Bucharest when a producer heard him sing at a party and asked him to come to England for a part in a show. He didn’t know any English, and when he arrived in London, he got off the train repeating the only words a friend had taught him: “Good-by, everybody.” He thought he was saying “hello”.
And somehow that reminds me of the wonderful story about George Kaufman and Jed Harris which concerns Harris’ idea of keeping cool in the summer.
It seems he keeps the heat from his door by sitting in the office stark naked. People may swelter around him but not Harris. One day George Kaufman came up, and to his surprise discovered Harris at his desk without a stitch of clothes on. Kaufman didn’t show any curiosity. Instead he sat talking for an hour or more with remarking one way or another on the other’s lack of apparel. At the conclusion of his visit he rose to his feet, shook hands with the other, then sauntered to the door, where he halted and turned around.
“By the way, Jed,” he said in a most casual manner, “your shirt is unbuttoned.” Then he turned and walked out. 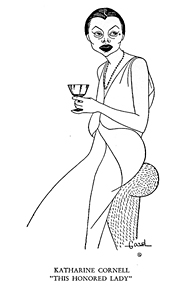