In Your Hat, pt. 9 ⋆ Cladrite Radio
Skip to content

And here is Robert Garland, who pilots (or piles-it) the dramatic column in the World-Telly, and is a regular customer as a certain blind spot in the roaring Fifties (they’re roaring further uptown now). He’d been a regular patient at the drink infirmary for more than a year when one night he showed at the barred door and knocked the magic knock. A weary, unshaved faced appeared in the aperture.
“Pliss?”
“Hello, Tony, I wanna come in.”
“Who are you?” the face inquired.
Infuriated because he had spent his good shekels for so many nights and still remained a dim bulb in the big sign, he shouted back the first thing that came to his mind—a catchline from a New Yorker cartoon.
“You must remember me,” yelled Garland, “I’m the guy who punched my wife in the nose here last night.”
And he was ushered in with any more undue ceremony!

I remember my astonishment upon learning the very studious-looking gentleman at the corner table was Dennis King, most romantic figure on the stage . . . Will Mahoney‘s grand entrance entirely surrounded by Earl Carroll‘s most luscious vampires, nine of ’em. Hold Mahoney’s Hand was their favorite song.
Sam Shipman of the positively guaranteed non-combable hair lunching daily with a perennial script under his arm . . . Basil Sidney and Mary Ellis, co-stars, announcing that they had decided to make it permanent, and their elopement that very night . . . Kenyon Nicholson opining that he expected his play Torch Song to be fair, but that his second production of the season, Stepdaughters of War, would be a hit, and the vice versa results . . . my surprise on hearing manly Jack Dempsey‘s piping soprano voice . . . receiving a huge box of candy from Miriam Hopkins which weighed nearly as much as its charming donor . . . Georgie Jessel carrying a different cane every time he sauntered in for lunch, so ‘elp me . . . failing to recognize Jed Harris. Cause: one mysterious shave . . . refusing a tip from Tammany Young to enable to maintain his non-paying reputation . . . racking my brain to find out why Ring Lardner was walking around and around the restaurant for hours until late at night, and learning that he was just in one of his frequent dazes . . . sending Gard to City Hall to caricature Jimmy Walker who had refused to sit for the drawing in our restaurant. Ah, our shy ex-mayor . . . Johnnie Galladet and Helen Menken holding hands between courses at lunch . . . Herb Rawlinson sketching pictures on the tablecloth, and my advice to him to concentrate on acting . . . Primo Carnera and Maurice Chevalier tossing a coin to see which one would pay for the luncheon. Maurice’s smile of jubilation when Primo lost . . . and Jack Pearl, just another good stage comedian until he clicked on the air. Now he’s set for Hollywood and he’ll be worth a million by next year. Vas you ever in heaven, Sharlie?
Selling a book to Pat O’Brien, who has made good in the movies, and then loaning him taxi fare for his trip home . . . Marcel Achard, ze French author, and his so expensive chapeaux, each costing not less than fifty real dollars . . . Ruth Roland‘s and Ben Bard‘s genuine devotion to each other . . . Jeanne Green’s fascinating chic . . . Mary Nolan‘s startling blonde beauty and her boyish ex-husband, who actually carried around innumerable photos of her . . . Texas Guinan (you remember her) ordering roast beef for her dog Feet, and a cup of coffee for herself . . . the farewell party given to the Graphic managing editor, and everyone showing up but Ed Sullivan, who had the most cause to be grateful. Bad manner even out of print . . . and the same editor saying he was giving up newspaper work to turn farmer, and the deafening (it’s always deafening, isn’t it?) applause he got.
Meeting Mae Slattery, the regular “stand-in” for Nancy Carroll, and my feeling of sadness upon thinking that Mae, who in my opinion is so much sweeter than Nancy, can never get ahead because she looks so much like the twice-married red-head . . . getting a call from the Paramount casting offices to appear the next day for a “bit” and not going because I thought it was a joke. My embarrassment a few days later when Dudley Murphy, the director, reproved me for not coming to the studio when I was called . . . Hugh O’Connell‘s heart of gold which he tries to hide under a blasé exterior . . . Hugh loves to do thing for others but hates to get credit. There aren’t many like him on Broadway . . . writing a silly little poem and getting a big thrill when Bide Dudley actually ran it in his World column . . . Chester Morris still so much in love with his wife, Sue, after five years of marriage that he calls her up every hour to reiterate he that he loves her . . . Monta Bell, the flicker megaphoner, who always wears a béret and red sweater . . . making my radio début over Station WMCA and being surprised at myself when I forgot to get the traditional “mike” fright . . deciding to let my hair grow after seeing how gorgeous Joan Crawford‘s long bob appeared . . . Peter Arno‘s pornographic sketch in my autograph book (description on request) and the attention it attracted . . . discussing art with Harrison Fisher and my brazen suggestion for a drawing, and the thrill I got later when it actually appeared on a magazine cover . . . the Ripley farewell party before he left for Africa. Dancing with the guest of honor, Robert Ripley himself. Believe it or not . . . Sir Hubert and his beautiful wife, Lady Wilkins. I wonder she really thinks about his dangerous expeditions . . . Major Kennelley’s smile—he was still a bachelor then . . . Phil Klein‘s glorious voice, used only to entertain friends. It’s a shame; he’s better than most professionals . . . being snubbed by a chorine who formerly danced at ten-cents-a-turn Roseland with me. I guess she was afraid I’d spill the beans. 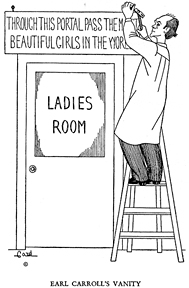