In Your Hat, pt. 2 ⋆ Cladrite Radio
Skip to content

Here’s Chapter 2 of In Your Hat, the 1933 tell-all memoir by Hat Check Girl to the Stars, Renee Carroll:

I DON’T claim that Ziegfeld missed a bet when I decided to become a hat check girl, but I fill a spoke in the wheel, and most of the boys want to go around with me.
Honestly, though, I can’t say I hate it when for no good reason at all Buddy Rogers kisses my hand as publicly as if we had been on the Roxy stage. Two girls who were squashing their noses against Sardi’s window well-nigh swooned when that happened, and I’d be fibbing if I said I was far from pulling a faint myself. Only a few weeks before I had been standing at the stage door of the Paramount Theater waiting to catch a glimpse of America’s Boy Friend, reveling in the usual girl’s thoughts about swinging in a hammock with Buddy Rogers at my side, or is it paddlin’ a canoe or listenin’ to the moon? I’d heard lots of people call the tall dark boy Bloody Rogers in jest, but it isn’t fair.
Well, anyway, he came into Sardi’s, handed me his hat, and then, inquiring after my health in a most solicitous manner, touched his lips to my hand. Maybe it’s true that a couple of the Broadway wise boys who were sitting in the restaurant did make noises that sounded suspiciously like Bronx nose blowing, but it was a dream of a moment. For a second I forgot that I was supposed to be sophisticated.
And Bob Montgomery, before he became what he is, and you know what that is, was just another of the nice Broadway gang. He was one of my “promissory nuts”, as I called the boys of that class, who were always promising things for the dim future.
In Bobby’s case, it was always the generous tip he was forecasting because he didn’t have even a dime in his jeans to leave for checking. Not that I minded at all, but business must be on the level. And whenever he’d pick up his hat, after unsuccessful attempts to land some work by being seen at Sardi’s during lunch, he’d say: “Put it on the cuff, Renee.” Unfortunately, I wear no cuffs except mental ones, and I keep remembering little things like that.
Especially I’ll never forget the little fellow who was so near-sighted that he once tipped me a penny, certain that it was a dime. And ever afterward, recalling his mistake, he would come into Sardi’s every day and say: “You remember me, don’t you, young lady? I’m the man who gave you a cent by mistake!” As if I’d ever forget a penny tip!
Tipping is a great art if you know how, and getting the tip—particularly from a celebrity—is even a greater one. Getting a man to tip without his being conscious of the amount is the most delicate and subtle operation in the world. Some day I’m going to write a book on “The Technique of Tipping.”
I’ve been talking a lot on this subject to professional waiters. I don’t mean the boys who are helping Mother along by taking up the table as a sideline, but those whose front handles are usually Oscar or Fritz, and in whose families waiting has been a profession for centuries. One of our waiters was so proud of his serving lineage he claimed that one of his ancestors served spaghetti on the Santa Maria!
People naturally hate to tip, especially when they have a Gallic strain in them. Generosity is not usually governed by economic conditions. Even when a man who tips a good amount ordinarily is almost broke, he will not let this be a factor in keeping him from tipping his usual amount. It’s the habitual tightwad who’ll skimp on service and then go out and let his girl friend rook him for some matched sables.

One day Walter Donaldson, the songwriter, drove up to the restaurant with Maurice Chevalier. It was summer, and as Chevalier came out of the auto, he took off his hat and threw it on the back seat. Donaldson kept his on.
I believe in the equal distribution of wealth, and when the two approached my booth, I stopped the inimitable Maurice.
“Mr. Chevalier,” I began. “I paid a dollar to see your newest picture last night.”
“Oh yes? And how did you like it?”
“I thought it was fine,” I told him.
“Thank you very much.”
“But, Mr. Chevalier, after I paid a dollar to see your picture, do you think it’s fair for you to leave your hat in the car to save a dime?”
I knew it wasn’t the nicest thing to do, but it worked like a charm. The Frenchman ran out into the street, retrieved his hat and deposited it with me.
“It will never happen again!” he assured me as his famous underslung lip curled forward in its traditional smile
“Merci, mille fois.” I told him in my best French. He tweaked my cheek and marched on. Walter Donaldson thought it was a riot and didn’t stop laughing for two days. 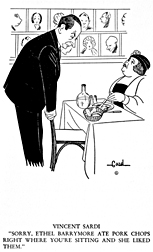