He is Mrs. Horowitz’s little boy, Jacob. But in the bright lights of Broadway, it’s JED HARRIS. 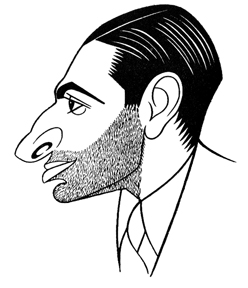 Four years ago he knew where the Automat was but he didn’t have the nickel. Today he is worth over a million dollars. In the days when he didn’t have a penny he told everybody he could make a fortune whenever he was ready.
He wears only the top part of his pajamas.
Was born in Vienna and came to this country at the age of three. He has three sisters and one brother.
His personal appearance is a minor thing with him. He has had the same hat since he’s been in the show business. If it isn’t the same hat it looks the same.
Is, however, particular about his shoes. They must always look like new. Every other week he purchases a new pair.
The script of Broadway, originally titled Bright Lights, was rejected by almost every theatrical manager. George M. Cohan turned it down because he didn’t like the characters. William A. Brady because he couldn’t get Tex Guinan to play the hostess. A. H. Woods refused, writing these noble words across the title page: “Not with my money, sweetheart.” On a first reading even Jed Harris rejected it. Six months later, reading it for the second time, he bought it and became famous.
He carries very little money with him. Generally allows someone else to grab the check.
He hates to shave due to the fact that he has “tissue paper” skin. No matter how careful the barber is, his face always bleeds after a shave.
Seldom does he drink. He likes to pretend that he is drunk.
His ambition is to have his own ocean liner.
During rehearsals of a play he is a mad man. For the first couple of weeks he has no confidence in the script. After he has passed through that period he believes he has the greatest play in the world.
Every Friday evening he visits his parents and has noodle soup. They still live in the same house in Newark.
He plays the violin well and is quite adept at card tricks, which he learned from a vaudeville magician. At parties he entertains by reciting complete acts of his plays.
Does most of his work between midnight and four in the morning in the office.
His favorite meal is one consisting of beans, hash, pickles and near beer.
He was fired from the publicity job of a Jewish charity organization by a man who is now doing theatrical interviews for a leading metropolitan newspaper. He has issued a standing order that this man must never be permitted to interview him. He is careful, however, that this interviewer receives aisle seats for all his shows.
With the money he made from Love ‘Em and Leave ‘Em he got married.
No matter who the author or star is, if he doesn’t like the play, he closes it out of town. He tried for two years to get Ina Claire to appear in a play for him. Then he closed that play, The Gaoler’s Wench, forty-eight hours before it was due on Broadway.
He possesses the intuition of a woman.
Once he talked a college chum into taking him to Europe. Quarreled with the chap in Paris. After bumming about London he worked his way back to America in the stokehole of a boat.
He is afraid of old age.
His favorite photograph is the one in which he is sitting on a table with his hands carefully folded in his lap. His shoulders are rounded and his eyes have that faraway look—like a genius.
He can talk anybody into anything.
Works on the script of every play he produces. Always suggests new situations to be written into the play. Twenty-four hours later he telephones the playwright to inquire if the suggested bit has been written. If it hasn’t he merely says: “If you’ll do that you’ll make me very happy” and hangs up.
Dreads the impact of cold water. Whenever he goes to the seashore he sits on the sand all day without going into the water.
He does everything in high gear. Worries about things. Delays doing them until he has worked himself into an emotional state. Then he is a tornado. Nothing can defeat him.
Lives in a duplex apartment in Sutton Place. His second ride in the elevator in that building cost him exactly $212.
Recently in a restaurant a waiter wishing to impress the people at his table pointed and said: “See that man. That’s Jed Harris. He shaves and it comes right out again.”
Noel Coward calls him “Destiny’s Tot.”
On the opening night of his plays he is home sleeping. Whenever he wishes to break an appointment or avoid a tense situation he goes to bed.
His favorite character in all history is Jed Harris.
If you enjoyed this post, please consider
supporting Cladrite Radio on Patreon