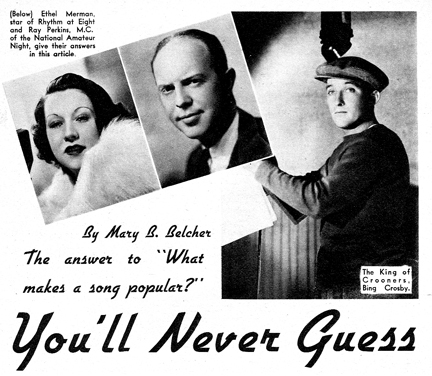 HAVE you ever tried to write a song? Are you one of the millions of amateur tunesmiths who haven’t been able to get anywhere in Tin Pan Alley? If you are (and who isn’t?) here are some hot tips from the boys and girls who write ’em, sing ’em, play ’em publish ’em.
I think the answer to ‘What Makes a Popular Song Popular?’ can be found in my own astonishment and pleasure over the success of one of my first tunes, Body and Soul,” said Johnny Green, youthful pianist-composer-maestro of the Columbia Broadcasting System.
Johnny told us: “Nobody was ever as surprised as myself when it caught on fire in Tin-Pan Alley. Now, I had written that tune because I wanted to write it. It had been haunting me, it was as near an inspiration as any tune could be, but I had secretly thought the melody was much too complicated and involved to find favor with the general public.
“After that song was put over in a big way I fought for my style of composing tooth and nail, insisting that not even a measure should be changed but it took the enthusiasm of the public to convince me that I was on the right track. The moral, boys and girls, is this: The real hit tunes are probably the ones that the composers couldn’t help writing.”
On the other hand, Kate Smith, who has popularized many ditties (including When the Moon Comes Over the Mountain, remember?) believes that trying to figure out the exact ingredients of a successful song is like trying to answer the question, “how high is up?”
“The moods and tendencies of the public changes like a chameleon,” Kate believes. “Sometimes they feel ironic about romance; sometimes sentimental; sometimes wistful. Incidentally, the tune which catches the prevalent sentiment is likely to start a new trend in popular songs. There will be lots of others like it, once it has caught fire but probably none of them will find favor with the public like the first one. Remember how The Last Round-Up started an avalanche of hill-billy tunes?”
Conrad Thibault, baritone singing star of the Showboat and many other big air programs feels that the thing that makes a song popular is a good message, both in lyrics and music, played and delivered in such a manner that even a person who has no musical training at all can understand it.
As master of ceremonies of one of the biggest Amateur Night broadcasts in all radio, we were sure that Ray Perkins would have reached some interesting conclusions. Ray, you know, is one of those old gong ringers who goes into action whenever the amateur talent and their renditions get too painful.
“A hit tune,” Ray informs us, “is a song that no one can murder . . . not even an amateur! It has nine lives . . . like a cat!” And with this astute observation Ray went off in search of bigger and louder gongs.
Jack Mills, head of Mills Music, has published hundreds of big song hits during the past fifteen years. Among the songs which he rightly predicted would become popular, are Dinah, Star Dust, Moonglow, Haunting Me and I Can’t Give You Anything but Love, Baby.
From the publisher’s point of view there are four requisites for songs hoping to find a welcome at Mills Music. Jack enumerates them, as follows:
1. The song must be well-constructed, both in lyrics and melody.
2. The idea of the song must be felicitous; one which intrigues the public by its lyric or melody, or both.
3. The song must appeal to orchestra leaders and singers in order to become popular.
4. The song must not be too difficult to play or to be able to remember. 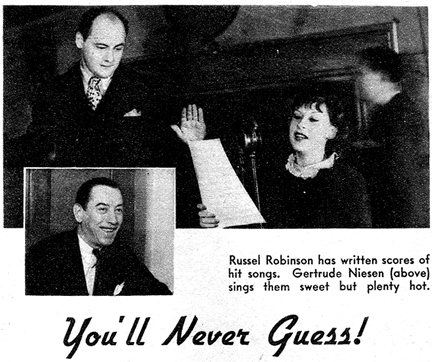 Gertrude Nelson, exotic singer of distinctive numbers, thinks there are two important things about a tune. If it lacks them, she relegates the song to the position of a second-rate fill-in number.
“First of all,” according to Gertrude, “You’ll notice that most popular songs have plenty of surprises. It’ll be fairly simple, but it’ll shock you a little; like a short, short story with a surprise ending. Secondly, what makes a tune vital is plenty of emotion . . . emotions in the lyrics and . . . emotions in the melody.”
Mitchel Parrish, composer of innumerable hits, believes that the public is a fickle quantity and that there is no forecasting their taste at a given time. If a good song coincides with the mood of the public at the time it is written, it may click and become a hit; however, there is a large element of chance involved in a good song becoming a successful number.
Between boo-boo-ba-boos, Bing Crosby found time to tell us his ideas on the subject. “I think,” said Bing, “to find the very core of popularity in a tune it’s a good idea to refer to those old-timers like Dinah, St. Louis Blues and Alexander’s Rag Time Band, which are still being played.
Those three tunes, for example, have something in common . . . their innate rhythm, simplicity and melodies anyone can remember and sing. They are also adaptable, and by this I mean that they can be subjected to a hundred different arrangements by hot bands and sweet bands and still keep identities.”
It was an unusual popular song that brought fame to Ethel Merman, Eadie Was A Lady, so it is no wonder that this famous torch singer has evolved some original ideas about the songs she sings and would like to find.
“I think lyrics can make or break a song,” Ethel confides. “They help to make it a wow or squelch it. Insipid or senseless lyrics can make a pretty tune almost unsingable. There was once a time when you could almost bet your hat that any romantic song would be rhymed by the rule of moon-june-you-blue.
“Well, thank goodness, those days are over and singers no longer have to jabber a lot of nonsense.”
Hoagy Carmichael, composer of Lazy Bones, Ol’ Rockin’ Chair, and of course, Star Dust, frowned very earnestly when we asked him his opinion.
“Well,” he said slowly, “because of the great demand for music to supply the needs of air, stage, and pictures, almost any song stands a chance.” Good news, amateurs!
“A certain percentage of those tunes are bound to find place as lesser hits. I don’t believe they are really popular in that a lot of people demand to hear them, but the orchestra leaders play them because they are well orchestrated and easy to sing, and are in tune with our times.”
Then we dropped in on another hit-maker, J. Russell Robinson, you know, the writer of Margie, Mary Lou, Stop The Sun, Stop the Moon—we could go on ad infinitum. Greeting us with his usual broad happy grin, he quickly answered our question with, “A wedding of words and music, that’s what makes a real hit. But once a song is written plugging does a great deal. You know yourself after you hear a song that second time you say, ‘That must be a hit.’ Which definitely helps to make it a hit.”
On our way out we met Ralph S. peer, head of the Southern Music Publishing Company, and to our usual query, he responded,
“If I knew the answer to that one I’d be a millionaire!”
Thus he sums up the idea you have probably been gathering from all these opinions—there are very definite requisites for a good tune, there is no standard recipe for what makes a song popular.
So keep on writing them, and here’s luck to you. You may have a hit!
THE END
If you enjoyed this post, please consider
supporting Cladrite Radio on Patreon