We’re of the opinion that no performer’s appeal has dropped as much over time as Al Jolson‘s.

By that we mean, given what a huge star he once was, it’s intriguing how dated and, well, odd he sounds to many people today.

Not that any other performers who became stars in the first three decades of the 20th century are moving many records (or mp3s) these days, but Jolson, to our ears, stands nearly alone among the stars of that era as a not terribly easily acquired taste for 21st century listeners.

This profile, first published in 1934, reviews Jolson’s rise from a hardscrabble childhood to unparalleled stardom. Give it a read, and see if you’re won over. And when you reach the end, we’ve included a pair of Jolson recordings for your consideration. “Sonny Boy,” especially, is Al at his most … emotive.

“MAM-MY! Mam-my!” boomed the great, heart-to-heart voice of Al Jolson, and the whole world shouted, “Here I is!”
With storms of wild applause, vast audiences filled the pockets with their idol, who had grown up from hungry, little Asa Yoelson, to overflowing with millions of dollars.
Born in St. Petersburg, Russia, on May 26th, 1886, Asa soon was taught the chants and songs of the Hebrew religion that he might become the seventh in a direct line of Yoelson cantors.
While he was still a small child, the family came to America. They settled in Washington, D. C., where the father became cantor in a synagogue. 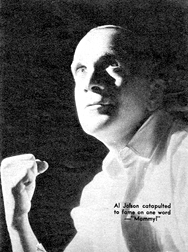 Now that the little fellow’s tummy was gratefully full, he suffered the pangs of another hunger. It was for high adventure, a restless craving for romance.
He no longer wanted to be a cantor, but the grandeur and throbbing sorrow in the music of his people had already left their indelible beauty in his voice.
To escape the boredom of his childhood, Asa ran away. He rode to New York in a freight train to join his brother. Falling asleep on a park bench, the little youngster awoke to find that someone had stolen his shoes. His brother sent him home.
Next, eager for excitement, Asa ran away with a circus. Discovered, the manager said he was too young. He sent him right back to Washington.
Undaunted, the exuberant runaway wandered off to the army camp of a regiment in the Spanish-American War. The attractive, brown-eyed lad instantly won the friendship of the soliders. They enjoyed his rare ability as an entertainer, and adopted him as their mascot. However, they urged him to return to his parents.
His last runaway was with a burlesque show, when again he was promptly sent home.
Asa had become resigned to wait in Washington until he owned his first pair of long pants. With the long pants, he put on a new name, Al Jolson. The combination seems to have brought him good luck. He found work as a super in “Children of the Ghetto,” at the Herald Square Theatre, New York.
A little later Al joined his brother, and a friend named Palmer, in a vaudeville act. There followed years of one-night stands, traveling from coast to coast. He knew nights of near-despair, and days of hunger.
Al had to hunt for cheap rooms, and often he found them miserably cold or stiflingly hot. Loneliness and dreadful food were his frequent lot.
Following the San Francisco earthquake and fire in 1906, he got a job in a Barbary Coast café. Here, Jolson created his own informal style of entertaining. Later, as the greatest box-office attraction on the American stage, he developed it into a real art. In this achievement, he stands supreme among the entertainers of our time.
To make himself heard over the din of the city’s reconstuction, the gay troubadour stood on the piano near the audience, he got down on his knees for “sob” songs, and carried his listeners into a “colored” heaven.
He was wearing black-face. To an unnamed, old negro dresser in a New York theatore goes the credit for Al’s make-up.
“Mister Jolson, why don’t yo’ try singin’ yo’ songs blacked up?” the wise old fellow had said to Al.
The suggestion turned the tide in Jolson’s career. The Barbary Coast crowds raved over him. The next year, he became a member of the Al Jolson became King of Broadway’s royal entertainers. The Shuberts signed him, in 1911, for musical shows at the Winter Garden Theatre. Gone were the one-night stands. The singing waiter of the Embarcadero became the biggest star on the Great White Way.
Jolson had sung to popularity more great songs than any other of the lionized singers. The list of “hits” he has made is staggering.
Al’s favorite stage role was in “Robinson Crusoe, Jr.” He proved the most successful and biggest drawing card the Winter Garden ever had.
In “Sinbad,” 1921, by Joe Young, Sam Lewis and Walter Donaldson, seemed to come right from the heart of this most dashing of stars.
“The sun shines East,
The sun shines West,
But I’ve just learned
Where the sun shines best,”
as sung by Al’s imitators threatened to prove a national epidemic.
Pulling up his golden stakes, he chanced the marvelous reputation of a lifetime. He answered the call of the cinema capital.
Jolson made “The Jazz Singer,” which revolutionized pictures.
There followed his superb performances in “The Singing Fool,” “Say it with Songs,” “Mammy,” “Big Boy,” “Hallelujah, I’m a Bum,” “Wonder Bar” and, along with his wife, Ruby Keeler, “Go Into Your Dance.”
Jolson is known as the hardest working man in the theatrical profession. When he had reached the movie “tops,” true to character, he sought new heights to climb. He answered radio’s popular, national demand for the one artist who can give a harmony of laughter, tears and song.
Al Jolson met Ruby Keeler, the lovely movie star, when she was playing in Chicago in “The Sidwalks of New York.” Every night she played Los Angeles, he sent her flowers with a card attached saying, “Guess Who?” They were married September 21, 1928. Jolson is full of sentiment. He and Ruby are deservedly happy. Not long ago they adopted a baby.