In Chapter 11 of his 1930 memoir, Vagabond Dreams Come True, Rudy Vallée had reached a point in his career that found him working all day long and sleeping no more than three or four hours a night.

As Rudy describes it below, he and his band had two rehearsals every morning, four live shows a day (five on Saturdays and Sundays) in a vaudeville theatre, and a steady night club gig that went from 11 p.m. till 3 a.m. nightly. Rudy also played a daily tea dance with a different, smaller ensemble backing him up and a dinner show as well.

Who ever said James Brown was the hardest working man in show business? In the laste 1920s, it might just have been Rudy Vallée.

Late to Bed—Early to Rise

BY THE TIME we were half-way through our vaudeville career I had aligned myself with the National Broadcasting Company completely. Before we began our vaudeville tour they held a broadcasting contact with me under which they broadcast me from the Villa Vallée with no cost to me or the club. Without my knowledge or permission I had been signed to play at a rival station which of course conflicted with my National Broadcasting contract. While we were at the Palace this had been litigated in court and on one occasion my appearance in court almost prevented me from getting to the Palace in time for our act. Every act there went on before ours and good old Van & Schenk dragged their act out as long as possible and stalled for me until I got there. Just before I went on, the manager gave me the good news of the judge’s decision: the National Broadcasting Company and I had won completely! 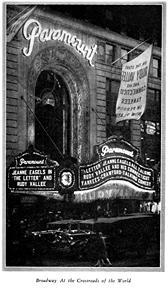