Couldn't have said it better ourselves ⋆ Cladrite Radio
Skip to content 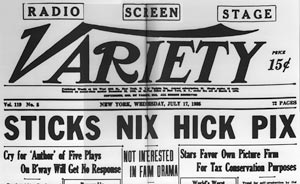 But that’s not the whole story. In fact, now that we’ve read the article at Variety.com, we’re not really sure this headline is a particularly good fit.

Still, over the years, that aggregation of words has brought us great joy; it makes us profoundly happy. We’re not certain who penned the headline—some say it was written by Lyn Bonner; others insist it was the work of Abel Green—but we tip our hat to whoever was responsible.

There are certain achievements that ought to give one a free pass for life, and, in our book, the coining of that immortal headline certainly qualifies. Here’s hoping Ms. Bonner, Mr. Green, or whoever else it might have been never had to pay for a drink as long as they lived.