Jimmy from the Block ⋆ Cladrite Radio
Skip to content 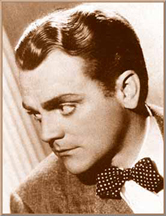 After a hectic day, we’re under the wire by less than two hours in wishing James Cagney a happy birthday.

Had he managed to stick it out a little longer, Cagney, perhaps the quintessential New Yorker, would have been 113 years old today.

Cagney was a delight from the start of his career to the finish, but we especially love his performances in the snappy Warner Brothers programmers of the early 1930s.

Below are three clips, the first two of which are taken from his early days in Hollywood. In the first, Cagney spars with Bette Davis in 1934’s Jimmy the Gent, and in the second, he speaks Yiddish in a scene from Taxi! (1932).

In the final offering, our Jimmy appears as the mystery guest on an episode of What’s My Line? that aired in May 1960.