HIS WORD IS HIS BOND

IN a business where an ironclad contract often becomes a mere scrap of paper, there is a man whose word is his bond. He often closes an important deal by merely a handshake. The man is SAM H. HARRIS. 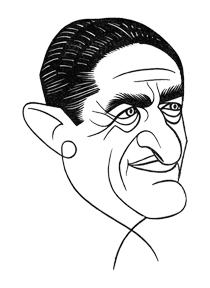 The “H” is for Henry, although he likes to believe it stands for “Hits.”
His first theatrical job was at Miner’s Theater. Was employed to trail John W. Kelly, the Rolling Mill man, a star of the times. When Kelly went out for a drink he played no favorites. He gave every saloon along the Bowery a break. Harris’s task was to tag after him and bring him back to the theater in time to go on.
When a young girl comes to him, anxious to get into show business, he advises her to go home and get married.
At twenty-two he owned six horses. Entered four of them in a seven-horse race. They finished fourth, fifth, sixth and seventh. He immediately traded his stable of horses for a bulldog.
His favorite expression: “You can play only one way—straight.”
Was once part of one of the most successful partnerships in the theatrical business: Cohan and Harris. That firm dissolved, friendly, during the actors’ strike. Cohan picked up a blotter, which had his picture in one corner and Harris’s in another. Tearing the blotter, he tossed the half with Harris’s picture to him and said: “Sam, we’re through.” That’s all there was to it.
His trousers can stay up without support of either a belt or suspenders.
Always sits in the last row of the balcony at the opening of his plays.
Is the only theatrical producer to have the honor of having a book dedicated to him by Alexander Woollcott.
He hasn’t a gray hair in his head. Bets have actually been made that he never will have a gray hair.
His idea of a swell meal is a good bowl of vegetable soup.
Any play he produces must have these two requisites: In his own words, “It must add up at the finish.” Secondly, it must contain at least one character for whom the audience will root.
He never harbors a grudge.
Was once in the prize-fighting racket. Trained his protégé faithfully. Only to see him knocked out in the first five minutes of action. While this man was being counted out, he was in the other corner, signing up the winner. You’ve probably heard of the guy—Terry McGovern.
He eats chop suey only on rainy days.
In his opinion there is no man in the world who knows the theater as well as George M. Cohan.
Every time he is about to close a show, his comment is: “I can’t go along with it.”
Is now the owner of a fine stable of horses. He names his horses after fond memories. One is called Terry McGovern. Another is known as Sadie Thompson.
As a kid he greatly admired John Drew. Although just getting out of short pants he grew a heavy mustache in order to look like his idol.
His favorite author is George S. Kaufman. And, as far as music is concerned, he taste begins and ends with Irving Berlin.
He once worked in a hat store on Grand Street. Every week he had to make a delivery away uptown, at Seventy-second Street. For this he was given a quarter for carfare. He walked, thus giving a dollar a month extra to his mother. Every month his mother had to buy him a pair of shoes costing a dollar and a quarter. A little figuring and shortly he was told to spend the quarter for carfare. His economy was costing the family money.
He will play cards with anybody in the world but Harpo Marx.
His office is a studio room in the Music Box Theatre. A wall door leads to an especially constructed dungeon. Inside there is a fully equipped bar. The entrance is guarded by a cuckoo clock. While leaning against the bar the pressing of a button will produce a beautiful scenic effect. The ceiling becomes “Blue Heaven” and the stars twinkle.
When an actress’s performance pleases him he expresses his delight by saying: “She gives me a lump.”
If you enjoyed this post, please consider
supporting Cladrite Radio on Patreon