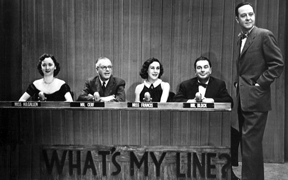 2 thoughts on “What’s My Line? The Lost (and Now Found) Episode”