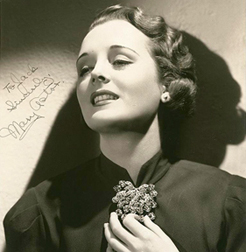 Mary Astor is perhaps best remembered today for her role as femme fatale Brigid O’Shaughnessy in the third — and, of course, by far best known — version of Dashiell Hammett‘s The Maltese Falcon, John Huston‘s 941 remake in which Astor starred opposite Humphrey Bogart, Peter Lorre, and Sydney Greenstreet.

But Astor was a veteran actress by then, having already made 97 movies, more than 40 of them silent pictures, starting with 1921’s Bullets or Ballots.

If you’re not familiar with Astor’s rich and varied career, now’s your chance to get caught up just a bit. Turner Classic Movies is celebrating Astor’s 104 birthday by airing some of her pre-Falcon movies all day tomorrow — Monday, May 3.