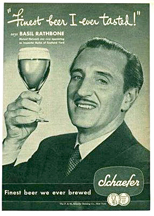 Backed by a century of brewing experience (Gerhard Lang Brewers).
Be ale-wise (Old Colony Brewing Co.).
Beer at its best (F&M Schaefer).
Beer belongs, enjoy it (U.S. Brewers Foundation).
Beer flavor at its peak (John F. Trommer).
Beer for good cheer, The (Potosi Brewing Co.).
Beer is as old as history (Budweiser).
Beer is no better than its ingredients, A (Hammerschlag Refining Co.).
Beer of friendship, The (Jax Brewing Co.).
Beer that grows its own flavor (Edelbrew).
Beer that made Milwaukee famous (Schlitz).
Beer that made the nineties gay, The (Potosi).
Beer that made the old days good, The (Jacob Ruppert).
Beer that makes friends, The (Lubeck Brewing Co.).
Beer that’s brewed the natural way, aged the natural way, The (Breidt).
Beer that’s extra-aged, the (Hyde Park Breweries Assn.).
Beer that’s time-ripened, time-tempered, The (Breidt).
Beer that wins awards, The (Jacob Hornung Brewing Co.).
Beer with millions of friends, The (Hyde Park).
Beer with the flavor as different as day from night, The (Breidt).
Beer with the 4th ingredient, The (Breidt).
Best beer by far at home, club, or bar, The (Jacob Hornung).
Best of all, Edelbrew costs you no more.
Best tonic, The (Pabst Corp.).
Better because brewed solely of malt and hops (Trommer).
Beverage of moderation for the nation, A (United Brewers Ind. Foundation).
Born in Canada, now going great in 48 states (Carling’s Ale).
Bottled beer with the draught beer flavor, The (Globe Brewing Co.).
Breidt’s for TIME, the part of beer you taste but never see.
Brewed in the British manner (Conn. Valley Brewing Co.).
Brewed on the same site since 1840.
Brewed solely of malt and hops (Trommer).
Brewer of better beer (Blatz).
Brewery goodness sealed right in (Pabst).
Brew for me in ’43, The (Wiliam Gratz).
Brewing better beer for the 96th year (Blatz).
Brew of quality, The (Pabst Blue Ribbon Brew).
Brews that satisfy, The (Ruppert).
Brew that brings back memories, The (Pabst).
Brew with a head of its own (Krueger).
Brew with small bubble carbonation, The (Heurich Brewing Co.).
Brew that holds its head high in any company (Senate Beer), Heurich.
Bubbles of health (Queen City Bottling Co.).
But the greatest reason of all is that Guinness is good for you.
Buy the Big Boy (Trommer).
By the glass, by the bottle, by the case, Buy Hyde Park. 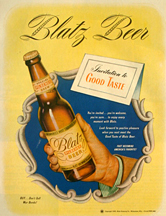 Case of Aetna is a case of health, A (dinner ale).
Choice of all who know one beer from another, The (Forest City Brewing).
Choicest Product of the brewer’s art, The (Falstaff).
Christmas time is Guinness time.
Cleveland’s favorite brew since 1862 (Leisy).

Have a glass of Guinness when you’re tired.
Have you tasted Feigenspan P.O.N. beer and ale?
Head of the class, The (Brewing Corp. of America).
Hey! Give me a tall one (Tall-One Co.).
Hoffman draught beer in bottles is really draught beer.

John L., the best bet for every round (J. Clark Distiling Corp.).
Just right, not sweet, not bitter (Central).
Just the kiss of the hops (Schlitz).

You’ll feel you’ve had something worth drinking when you’ve had a Guinness.
You get more out of Hampden (Hampden Brewing Co.), Williamsett, Mass.
Your first taste tells you and sells you (Pacific Brewing & Malting Co.).