This week’s Snapshot in Prose captures Cladrite Radio sweetheart Annette Hanshaw at the height of her fame. The year is 1935, and she’s already sold more than 4,000,000 records, has declined stage and screen offers, and claims to be mulling over the marketing of her personal method for reading music without any training. Alas, just two or three years later, she’ll give up recording and performing altogether, opting instead for a sedate married life with her husband, Pathé Records executive Herman “Wally” Rose.

And just FYI, Hanshaw’s nephew, one Frank W. Hanshaw III, says that her birth certificate says she was entered the world not in 1910, as the story below claims, but in 1901. Oh Annette, you deceitful minx!

DO YOU KNOW that the best known and highest paid artists on the air never studied music in their lives and wouldn’t know a cadenza from a condenser? ‘S a fact! If you studied the lives of Bing Crosby, Kate Smith and Annette Hanshaw with a microscope, you’d find that their music educations have been sadly neglected. 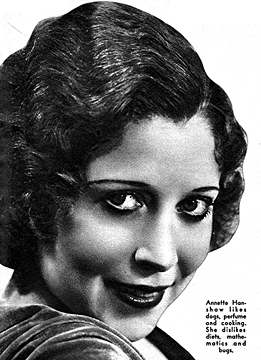 Do you think they worry over the fact that their technical knowledge of music is so limited? No, and you wouldn’t either if you had their incomes. Their stories only go to prove that you don’t have to have special privileges to get places in radio, singing, music. And the same thing is probably true in every other field of endeavor.
Let’s take the career of Annette Hanshaw, for instance. She was born in New York City in 1910. Her father instilled in her a natural love of music and she believes she could sing before she could speak. Anyhow, she was able to sing the choruses of 16 popular ditties of the day before she was 16 months old, and she’s added at least a song a month to her repertoire ever since.
Annette liked to sing always. Most of us are the same way. She surely had a natural flair for singing but since it was so effortless for her she never dreamed that some day it would pay substantial dividends.
She thought a career necessarily meant hard work, so she ploughed through school and took various courses, specializing in portrait painting. She aspired to be a commercial artist. She entered the National Academy of Design in New York and showed remarkable promise.
She went to parties often during the days when she was a popular young debutante and it was at one of these gatherings that an executive for a record company heard her warbling in her own, carefree way. He listened while she sang song after song to rounds of applause and many encores. At the end of the evening he handed her his card and suggested that she call at his office.
More as a lark than anything else she made a voice test at the recording executive’s request. She was having loads of fun and enjoyed it immensely when they put her in front of an orchestra while the wax disc whirled. She had had such a good time that she was almost ashamed to accept the check they handed her.
All of this took place less than seven years ago and since then her phonograph recordings have sold more than 4,000,000 copies, and she has managed to lose all hesitancy about accepting checks.
Throughout this entire procedure—and even today—she never read a note of music. She couldn’t. What she could and did do, though, was thoroughly memorize and cue every song she sang.
Although she has had many stage and screen offers, Annette has consistently refused to accept any of them because she wants to concentrate on her radio broadcasting and phonograph recording. She once even refused an offer from the great Florenz Ziegfeld, himself.
She rehearses in the evening, drinks lots of water before and during broadcasts, dictates all replies to her fan mail herself and scrupulously autographs all pictures herself.
Someday she may patent her method of reading music. Annette says it is really very simple and anyone ought to be able to learn the system in ten easy lessons.
*  *  *  *  *

Here’s a bonus treat for our fellow Hanshaw fans, one of our very favorites of her recordings:

Annette Hanshaw — Fit as a Fiddle