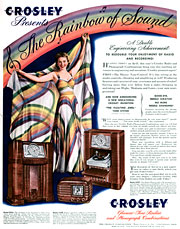 As the Pitch Perfect series continues, we today feature a collection of 1949 advertising slogans that were used to market radios, phonographs, televisions, and even radio and television broadcasting stations.

Electroneering is our business (Rauland), Radio—radar.
Emblem of worth in radio, The (Kodel Radio Corp.).
Entertaining New York and New Jersey 24 hours a day (Station WNEW).
Every one a good one (Davidson Radio Corp.).
Everything for the radio man (Midwest Radio Co.).
Everything in music (radio), Grunewald’s.
Excellence in electronics (Raytheon), Tubes.
Expanded coverage for E-X-P-A-N-D-I-N-G mid-America (Station KCMO). 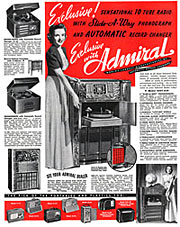 Get the most out of television with a Dumont Teleset.
Gold standard of radio receivers, The (J. B. Ferguson, Inc.).
Grand piano of the radio world, The (Fada Radio, Ltd.), Toronto.
Greatest music the world has known, The (RCA), Recorded music.
Greatest name in aircraft radio, The (Bendix radio).
Great thrill in radio by the pioneers of short-wave radio (Stewart-Warner).

If you want something better, demand Dewald (radio).
Individuality graven into them (Phonograph records), Brunswick-Balke-Collender.
In harmony with home and air (Magnavox).
Installed in minutes, lasts for years (Oak Ridge Antenna Co.).
Install it, forget it (Kodel Radio Corp.).
I tank I go home, I have a Philco there (radio).
It costs no more to enjoy Farnsworth fidelity (radio).
It’s in her home where he plans his (Sonora Phonograph).
It speaks for itself (H. P. Snyder Mfg. Co.).
It speaks for itself (Transformer Corp. of America).
It’s the contact that counts (radio sockets), Alden Mfg. Co.
It’s the working voltage (Dubilier Condenser & Radio Corp.).
It stops that howl (McDonald radio howl arrester), Spartan Electric Corp.

Just as if you were there (Morkman Radio Corp.).
Just plug in, then tune in (batteryless radio sets), Standard Radio Corp., Ltd. 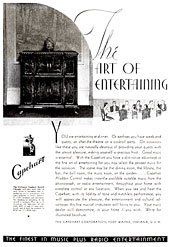 Name men fly by, The (Lear plane radio).
Name that means MUSIC to millions, The (Wurlitzer phonograph).
Name to know in radio, The (Brandes, Inc.).
Nation’s station, The (WLW).
NBC is the magic key to increased profits.
Needle for every need, A (Walco phonograph needles).
Network most people listen to most, The (Red Network), NBC.
Not merely as good as the others, but better than all others (Newcomb).
Now’s the time to talk it over (NBC). 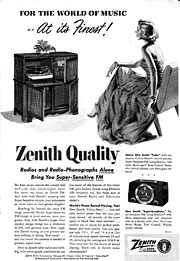 Quality above all (Solar capacitors). 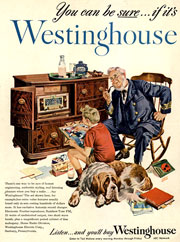 Speaker that speaks for itself, The (Jaynell Mfg. Co.).
Standard of comparison, The (condensers), Cardwell Mfg. Corp.
Standard of reception, The (Andrea radio).
Stars who make the hits are on RCA Victor records, The.
Station most people listen to most, The (WMC), Memphis.
St. Louis’ own and St. Louis owned (KWK).
Symbol of quality in radio since 1915, The (Magnavox).
Symbol of technical excellence, A (RCA).

Tell the millions in their own homes (NBC).
Theatre in your home, The (U. S. Television Mfg. Co.).
There is a Radiola for every purse (RCA).
There is no substitute for the best (Jewett Radio & Phonograph).
There is nothing finer than a Stromberg-Carlson (radio).

You CAN take it with you (Philco portable radios).
You can’t go wrong with Raytheon.

Zeniths play where many fail.