In Your Hat, pt. 13 ⋆ Cladrite Radio
Skip to content
In the 13th and final chapter of In Your Hat, the 1933 tell-all memoir by Hat Check Girl to the Stars Renee Carroll, she admits, after a dozen chapters spent glorifying the world of show business and the performers who populate it, that she finds the whole circus a bit depressing. It’s the has-beens, more than the wanna-bes, that sadden her, it seems, and she insists that she’s content to stick with the going concern that is her hat check concession. “I know that’s going to last,” Carroll writes.

She was wrong, of course. Hats have fallen mostly out of favor (though some of us still wear them), and many restaurants today don’t even offer a coat check service. But, for the most part, hats hung in there long enough for Ms. Carroll.

If you read to the end of this brief closing chapter, you’ll find some updates from throughout Ms. Carroll’s life, written in 1947 and 1951. 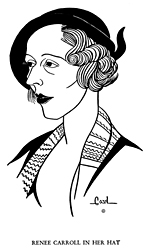 WELL, I’ve finished my fifth year at Sardi’s. The only thing that have increased are the measurements of my hips, the number of people I know, and the size of my tips! But I’ve never been happier in my life.
Broadway is a funny place. It means so many different things to so many different people. To those who had to fight their way up only to find, as the great Winchell puts it, “It’s easy enough to climb to the top of the ladder—the hard thing is to stay there”, Broadway is just a tragedy of shattered hopes. To those who are just starting out, with all their illusions still glittering brightly, Broadway is “the greatest community in the world.”
But to me, standing on the sidelines and watching the whole panorama unfold past my hat check cubby-hole, Broadway is just another street. It may have more mazdas, but it’s just as good a place to keep away from as the proverbial pool-room on the proverbial Main Street. It has its rewards, sure!—But so, too, have Broadway in Podunkville, and Metropolitan Avenue in Sqeedunk Hollow.
I wouldn’t swap my job for all the five-year contracts (with options) in Hollywood! I wouldn’t change places with all the girls Earl Carroll hopes he’s going to “discover” in the next five years! A few years of my face and figure might be enough for the theatre and movie-going public—but they’ll always want to have their hats checked. And as long as I don’t get their derbies mixed up, they’re going to need me. But show business—phooey! You fade quicker than a bleached blonde.
The game’s too hard and destructive, even for those who make good. The people who play (or think they’re playing) Broadway are too restless, too easily bored. They want novelty, new faces, new voices, new ideas. Anything new! Anything different! Don’t try to argue with me. I’ve seen it happen too many times.
Ten years from now they’ll all be gone. I mean nearly all of our “big timers” of today. That’s the sad part of the whole racket to me. In this story I purposely haven’t said much about the “old timers” who sometimes check their hats at my window and glow once more in the presence of Big Shots. Some of them are still near the top of the heap, but most of them are just a bit puzzled, just a bit wistful as they look at this week’s latest sensation, sitting at the center table and receiving adulation from all the rest of the customers. I’ve watched some of these oldsters when Joan Crawford swept into the room, and honest, it pained me to see the look in their eyes.
Just a few years ago they received the attention that’s now hers. Just a few years ago the fans clamored for their autographs. And now it’s all over. For a celebrity, that’s the hardest thing in the world to lose. The applause and admiration of the multitudes. Money, love, even self-respect, they don’t mind losing, but when the crowd cheers for someone else—that hurts.
So that’s why I say that they can keep their phantom fame, and I’ll keep my hat checking concession. I know that’s going to last.
Eddie Cantor once wrote a book called My Life Is In Your Hands. He was right. And mine—where do you think it is?
Right! In your hat, reader. In your hat!
THE END
* * * * *

The following story appeared in The New York Times on March 6, 1947:

Hat Check Girl Hands Tips to the Customers
As 20th Year on the Job Goes to Her Head
The quarter was in the other hand yesterday as Renee Carroll celebrated her twentieth anniversary as hat-check girl at Sardi’s Restaurant, 234 West Forty-fourth Street. “I decided this was my day to tip the customers,” she said. And tip them she did. By 8:30 o’clock last night, her quitting time, she had passed out more than $50.
The customers were startled—but nobody refused. Nine men, including Brock Pemberton, apparently not quite up to such a reversal in the established order of things, accepted the quarters, then gave a dollar in exchange. Another bought Miss Carroll a $13 bottle of champagne. John Gielgud, the English actor, looked blankly at his coin for a moment, then asked bewilderedly: “Is it the custom?” He was advised not to expect it again.
Telegraph boys and florists’ messengers also shared in the largess as wires—fifty of them—and boxes of flowers—ten—arrived during the day. Miss Carroll was kept busy sending the flowers home, 120 Central Park South, to get them in water quick. She wore two white and purple orchids—the gift of her “special friend.”
Actors, playwrights, agents and publicity men accepted the “tips” gleefully. David Ffolkes, scenic and costume designer, vowed he would wear his on his watch chain. The procedure was reversed only four times during the day when men who usually pay nothing—they have “passes”—gave out with coins in honor of the occasion.
Despite the excitement and the champagne cocktails, Miss Carroll kept up with her routine—twelve to three and five to eight in the check room and two hours at her bookkeeping in a theatre ticket agency in the building. “I posted statedments for an hour,” she said, “but I think I’ll check over the entries again tomorrow—just in case.
The day also marked Sardi’s twentieth anniversary at the present location. “I opened with the restaurant,” Miss Carroll said. “In fact, I was born in one of the hats.” Among the congratulatory wires was one from Mr. and Mrs. Vincent Sardi, the owners, who are now in Beverley Hills, Calif., on their first vacation trip.
Miss Carroll celebrated her “birthday” with dinner at the restaurant and more champagne cocktails. “Could you believe it,” she asked her friends, “all this excitement and not one wrong coat.”
* * * * *

The following story was published in The New York Times on July 13, 1951:

Renee Carroll has checked her last hat, she said with a big smile yesterday, even though most of her customer-friends in the theatrical world don’t know it yet.
Miss Carroll became known as the most famous hatcheck girl in the world in the twenty-four years she worked at Sardi’s Restaurant, 234 West Forty-fourth Street. This week she quit to do something she likes better: bookkeeping.
“But you know, men don’t wear hats in the summer,” she observed. “So nobody has missed me yet.”
This seemed unlikely, with extravagantly atriculate Sardi patrons popping back and forth between the restaurant and Miss Carroll’s new ofice next door. This is the Mackey Ticket Agency, where she has worked from 3 to 5 P. M. since 1940.
She had always considered herself “technical-minded—I loved mathematics and working with figures.” Because adding up quarter was not arithmetically satisfying enough for this taste, she took a business course several years ago.
“I’d checked a million hats,” she said, “and I thought some day I might be too tired to check any more.” When she returned rom a month’s vacation in Jamaica last week, she said, “it had become a question of ‘What do I want most?'”
She decided she would rather supervise, with the help of an assistant, the agency’s 3,000 charge accounts and its teletype communications with thirty-nine branches.
Though she had held her old job since the night the restaurant opened, Miss Carroll, now 43, “never really thought of it as permanent,” she said. Neither had she regarded it as a stepping stone into the theatre, which she loves “only from this side of the footlights.”

P.S. Renee Carroll would eventually marry Louis Schonceit, the owner of Mackey Ticket Agency. They were working on co-authoring a book that was to be entitled “Forty-four Years on Forty-Fourth Street,” but as far as we can ascertain, it was never published.