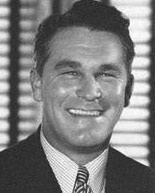 If we told you the picture on the right was George W. Bush in Ronald Reagan drag, you’d almost believe it, wouldn’t you?

It certainly looks like Dubya, only with the Gipper’s hair.

But it’s not—it’s character actor Guinn Williams, often called “Big Boy,” whose career began in 1919 and lasted until the 1960s.

Big Boy and Dubya share more than just facial features. They’re both Texans, though Williams was the genuine article, born and raised in the Lone Star State. They both shared a name with their fathers. And they both were sons of politicians, though Williams’ dad began his career as a rancher (and we’re guessing he did more than clear brush) and a banker before first becoming county clerk of Wise County, Texas, from 1898 to 1902, serving as a member of the State senate from 1920 to 1922, and then serving in the House of Representatives from 1922-1933. 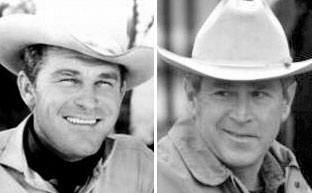 Oh, and the senior Williams was a Democrat, another key difference.

Rep. Williams’ son Guinn was given the nickname “Big Boy” by none other than Will Rogers. Guinn stood 6 feet, 2 inches tall and was muscular, so the handle was an apt one.

Though he acted in many other types of pictures, Williams was perhaps best known for his work in westerns, in which he generally portrayed a dim but likable second banana to the picture’s rootin’-tootin’ hero.

We’ve never seen a Guinn Williams picture without being reminded of Dubya; we find the resemblance striking. Watch the clip below, taken from Rafter Romance (1933) and also featuring Robert Benchley and Ginger Rogers, and see if you don’t agree.