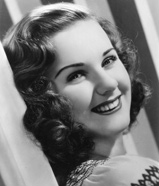 Actress and coloratura soprano Deanna Durbin, who died recently at the age of 91, became a movie star at the age of 15 in a picture, Three Smart Girls (1936), in which she was meant to be billed ninth (she sparkled so in the rushes that she was made the picture’s star). Durbin remained immensely popular until she turned her back on Hollywood in 1949, moving to a small village in France with her third husband, movie director Charles David.

Durbin’s first appearance came opposite the then-13-year-old Judy Garland. It was swing vs. opera, and who came out ahead depends entirely upon the listener’s inclinations.

We always find it a bit sad when performers who achieved such heights reveal later, as did Durbin, that they found no joy in their Hollywood success, but we admire Ms. Durbin for doing what made her happy. She managed to enjoy more than six decades out of the spotlight she disdained, and we figure that in itself merits a tip o’ the hat.