Hollywood Shorts: Vanity ⋆ Cladrite Radio
Skip to content
The days remaining in our April fundraising drive are dwindling down. If you’re even an occasional listener, help us pay the annual bill to our streaming provider. $40 covers an entire month, but literally any amount is appreciated. If you like our toe-tapping tunes, don’t take them for granted. Let us hear from you by clicking the link below and sending us a little love via Paypal. 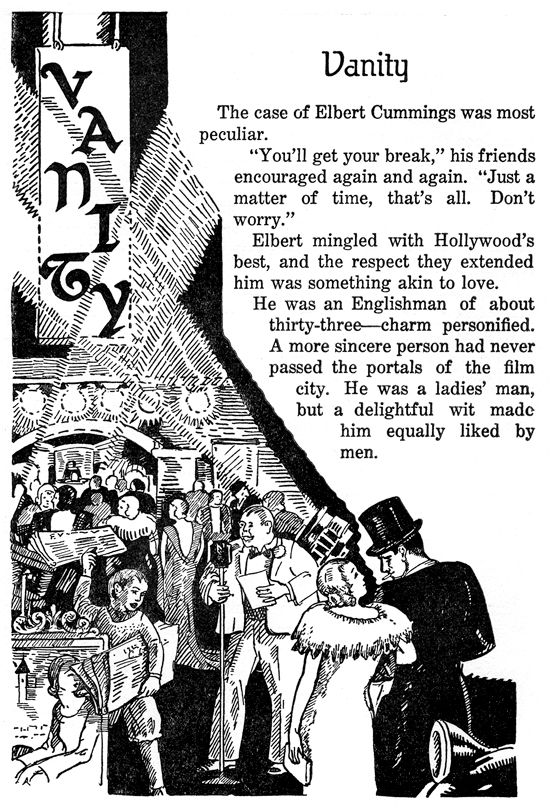 “I take this method so that the
real thief may never be known.”
Wearily he shuffled through the night to Betty Harlow’s home and laid a package at her door. After ringing the bell, he darted behind some shrubbery in the garden.
Like one who has untangled the last thread of a complicated knot, he experienced a warm, grateful feeling when he saw the maid pick up the package and close the door.
At the corner drug store, Elbert thumbed a telephone book for an address which he wrote on his personal card. When he emerged to the street, he handed the card to a taxi driver as if it were too great an effort to speak any more.
Some minutes later, the taxi driver pulled at his brakes, lighted the dome light, and announced:
“Number 1725, sir.”
When there was no response, the driver alighted and opened the door. A quick flash of understanding surged through him when he found Elbert Cummings crumpled in a heap upon the car floor. With a shudder, he turned toward number 1725 and saw purple and gray drapes framing a large window with a single palm plant. By the palm plant, a ghost-green electric sign spelled: HUDSON FUNERAL PARLORS.