In Chapter 15 of his 1930 memoir, Vagabond Dreams Come True, Rudy Vallée pays homage to the man who served as his saxophone mentor and muse, Rudy Wiedoeft.

Probably most people connect my name with the saxophone, but only a few know that all my life I have had a great desire to play some sort of a musical instrument. I went from drums to clarinet, to trumpet, to saxophone.
The clarinet I studied faithfully for ten weeks and then was forced to neglect it, due to a very hard job in a sawmill during the summer vacation. When I think of how close I came to losing my fingers I thank my lucky stars that I finished that summer’s work without receiving so much as a scratch from a saw. Many times when I worked on the “edger,” the saw teeth striking a knot in the board would throw it back so that the palm of my hand just missed the teeth. 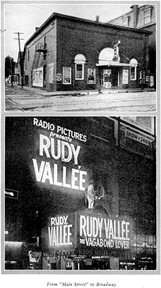 , and making a solo on a record, for which privilege I paid fifty dollars, the savings of many months. All three of my dreams were realized and of course the greatest thrill was that of meeting my idol, whom I found to be just as gracious and charming as I hoped he would be. I asked him if I should give up my school and go into music entirely, and he replied that by all means I should get my college education, so I often thank Wiedoeft for helping me in my decision to secure my degree. He allowed me to watch his band recording and gave me several hours of his time, which, of course, was quite priceless. I have never forgotten his kindness and I resolved that some day I would repay him.
The next summer I had resolved to transfer to Yale where there was more opportunity for work, moreover, New Haven’s proximity to New York guaranteed me many things. During the summer I received a wonderful offer to play in London for the winter at a very fine salary, with a guarantee of many records and concerts, and the opportunity to study at London University. I gave no definite answer until I met the group of men who were sailing; luckily I met them only four days before they sailed when it was too late for me to get my passport, because they persuaded me to go. Rather than go alone, I turned it down and they sailed without me. Thus I can thank the regulations regarding passports for saving me from losing what I value most, my college education.
I entered Yale the following fall and still continued to practice. In a short while, I found that I disturbed the other students in the dormitory by my practicing, so I paid fifty cents an afternoon for a Swedish fraternity hall where I practiced to my heart’s content. It took quite a walk to reach it but the complete freedom that I experienced while practicing was worth it. I played at the dining-hall nightly and played at country clubs and golf clubs and deb parties with the orchestra with which I was associated during my four years at college.
The summer of 1923 a group of us under the direction of Peter Arno, the famous artist whose clever drawings adorn The New Yorker, played for Gilda Gray at the “Rendezvous,” taking the place of the Cornell Collegians who had gone to Long Island during the summer. I bumped into Wiedoeft several times, and he wa always kind and courteous. Even though he had already told me all I wanted to know, it was still an inspiration to meet him, and of course I was helped considerably when he played even a few measures for me of some solo or other. I also met Don Clark, first saxophonist with Whiteman, whom I have mentioned before. He was likewise a great friend and admirer of Wiedoeft’s and owed much of his development to Wiedoeft, as they had both begun at practically the same time in California. Don was very wonderful to me and gave me considerable help. He has since retired and I count him among my staunch friends, and one whose friendship I hope I never lose.
I saw Wiedoeft just before I underwent the second operation on my side and he wished me the best of luck.
Then came another year, 1924, at Yale, a summer in Maine with a Boston orchestra, and the final acceptance of the London offer which had been continually forced on me ever since I had rejected it.
While in London (Sept., 1924 to June, 1925), I instructed over fifty pupils implanting in them the Wiedoeft method and ideas and holding Wiedoeft—and his records—up before them as my God, who, should also be theirs.
I returned in July and played again in Maine. I was in Maine that I first did a little singing. The summer of 1924, and the summer of 1925, for no reason at all I had taken it upon myself to sing such numbers as “St. Louis Blues,” “I Ain’t Got Nobody,” and several other songs. The summer of 1924, I had played with a small society orchestra and most of the times that I sang the crowd gathered around to listen to the words which seemed to fascinate them. Although they applauded me heavily I never thought any more about attempting to feature myself as a vocalist. When I returned to Yale the orchestra with which I had been playing threw cold water on my vocal efforts. Although they considered me a capable saxophonist, it was immaterial to them whether I attempted to sing or not, and as no one ever asked me, my megaphone remained unused. This I can readily understand, as after all my voice is not strong and at most of the affairs we played the crowd was very noisy. Society chatters while it dances and my vocal efforts were practically wasted on the air.
After I returned from London, I met Wiedoeft and this time it was he who thanked me for publicizing him in England as the publishers there had told him that I had caused an increasing demand for his records and solos. He asked me if I thought he would go well in England. Feeling that I had sown the seed for his personal appearance, I advised him by all means to appear there. He did so a year later and was very well received.
I continued to practice though not quite so steadily as before, since it gradually began to dawn on me that even the world’s greatest saxophonist was not overpaid, and that a business career in South America, with a knowledge of Spanish and English, might mean more of a fortune than all the saxophonic skill in the world. 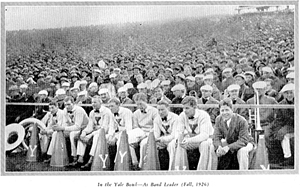 The following summer I was in vaudeville with a group of Yale boys whom I did not lead; I was just the saxophone soloist playing one of Wiedoeft’s solos and simple encores like “Kiss Me Again.” The following fall, the greatest of my collegiate ambitions was realized: I led the Yale band in the big bowl. I organized a saxophone quintet which played “Bye Bye Blackbird” and various other songs and received a tremendous ovation. That fall I appeared as saxophone soloist at one of the local theatres.
After graduation I once more did a tour of vaudeville with the Yale Collegians, though this time I did not play saxophone solos but sang the lead in a trio and played first sax in the orchestra.
Following the break-up of the act in September, when the rest of the students re-entered Yale, I played in New Haven at the arena, during a “Radio Week,” with the orchestra with which I had been associated while in Yale. Here I got my first glimpse of the great McNamee. As there were no radios at Yale it has never been my good fortune to “listen in” except once, to a big prize-fight. But I knew that McNamee was a man greatly admired throughout the United States for his ability to broadcast sporting events, and I was as much charmed by his wonderful personality as any of those present in the arena the night of the radio show that he appeared. Little did I realize then just what radio was to do for me.
I went next to Boston in the fall of 1927 where I played with several bands. But realizing that the field was too limited, I transferred to New York, hoping to find work. I have already written of meeting my boys and our climb to popularity. I have also mentioned that one of the greatest happinesses came to me at the height of our vaudeville success. During the week we played Flushing in Keith vaudeville, it was my good fortune not only to bring my idol, Rudy Wiedoeft, on the stage to acknowledge public acclaim, but to have a dinner cooked at his home in Flushing by his very capable wife, and to sit for pictures taken of the both of us playing together.
Two years previously, while on a tour for Publix Theatres, he had played Portland, Maine. I had notified my father of his coming; father had met him on his arrival and had seen to it that Wiedoeft had everything he needed for comfort. He was kind enough to come out to our little home town as soloist for the Kiwanians, something which I doubt his contract permitted him to do, and something which money could not have made him do unless he wished to. My sister had the honor of accompanying him and that clipping is stuck away in my scrap book to remind me of one of the brightest spots in my life.
My little brother met him after his last show the night he soloed in Westbrook, and brought him out again to our home where mother had prepared a big feast. Many of the neighbors came in while Wiedoeft entertained them with the jokes and tricks for which he is also well known. Today Wiedoeft is still the greatest of them all.
He has opened a studio where he accepts only advance pupils, and how lucky are those who are fortunate enough to be accepted by him! I count myself as one of his first pupils and a letter from him saying that I am, is one of my most prized possessions. He gave it to me shortly after I had returned from London, in gratitude for the work I had done for him there, and I feel so happy in the thought that I have been able in some little way to reflect some of my popularity upon this accomplished saxophonist, who did so much for me.
At this time I received a great deal of inspiration from a book called “The Guarded Heights”—in my day-dreams I often pictured myself in the role of the hero. However it was Wiedoeft who was my greatest inspiration.
It was he who inspired me to work over my saxophone, which in turn helped me to put myself through school and win friends and which eventually brought me the opportunity to lead my own band; and this in turn led to the discovery that my voice was suited to broadcasting and that my ideas on the presentation of simple dance music with song were ready for a warm reception by a public tired of raucous noise and discordant sounds.