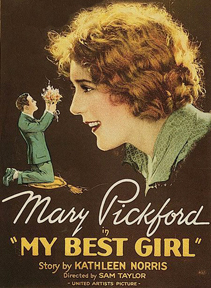 Some years ago, we encountered a curious usage while watching My Best Girl, a Mary Pickford silent (her last, as it happens) from 1927.

There was a scene between Mary and her future husband, Charles “Buddy” Rogers. The two playing Maggie and Joe, stock clerks at a Merrill’s five-and-dime store who are clearly smitten with each other.

Except Joe Grant is, unbeknownst to Maggie, actually Joe Merrill, son of the millionaire founder of the Merrill’s chain of stores. He has been placed at the lowest rung of his dad’s organization so that he might learn the business from the ground up.

Maggie: Joe, I have a trade-last for you. I heard the manager say you were a very efficient young man.

Joe: That’s because you’ve taught me so much about the business, Maggie.

Joe: Well, I know that one of the Merrills thinks you’re the finest little kid in the store. (Here he’s referring to himself, of course, since Maggie doesn’t know he’s a Merrill.)

We had never encountered the term “trade-last” before, so we looked it up in Merriam-Webster. We expected it to mean roughly the same as the noun form of “secret.”

But here’s what MW had to say:

“A complimentary remark by a third person that a hearer offers to repeat to the person complimented if he or she will first report a compliment made about the hearer.”

So Bill tells Barb that he thinks Brad dresses nicely. Barb offers to share Bill’s sentiments with Brad, but only if Bill will first tell Bard something nice he has heard someone say about her.

What intrigues us about this word is how awfully specific it is. That is, it applies to such a particular and somewhat convoluted situation. MW says the term was coined in 1891, and we can’t help but wonder how it came into use.

It’s also an oddly unintuitive word. You’d never guess, from hearing it out of context (or reading it in the intertitles of a silent movies), what it meant.

Oh, the things you can learn from watching an old movie.