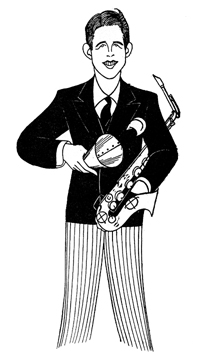 His real name is Herbert Prior Vallee. Took the name of Rudy from Rudy Wiedoft, the saxophone player. His idol.
Curses like a stoker. Has a temper and when it is aroused he screams like a woman.
His father was a pharmacist and owned a drug store in Westbrook, Maine, until last summer. The father is a French Canadian. His mother is Irish. Has one sister, Kathleen Marie, and one brother, William, who goes to Fordham College and lives with him.
Doesn’t drink much. When he does he takes a rye highball. The taste of Scotch makes him sick.
When the war broke out he ran away from home to enlist in the navy. While in a training school, they learned that he was only fifteen years old. He was put in the hoosegow until his parents called for him. Stills thinks he was a sailor.
His boyhood ambition was to be a letter carrier.
Sleeps in gay-colored pajamas. He snores and grinds his teeth. Occasionally he has a hot-water bag in bed with him to keep his toes warm. Gets semi-nightmares and wanders in his sleep. Several times his brother pulled him back from walking out a window.
Can play only two instruments. The saxophone and the clarinet. He two-fingers the piano a bit. He is left-handed.
As a kid and a student at Yale he was unpopular with the girls. While at college he majored in Spanish. His desire then was to be a wealthy South American business man.
He pinches the lobe of his ear with his finger nails when he is nervous.
Smokes occasionally. It is an English brand of cigarettes. He has posed for pictures smoking a pipe but detests one. Often requests people not to smoke a pipe in his presence.
The kind of a woman who appeals to him the most is one of the Lenore Ulric type of beauty.
Can often be seen in Childs’ or in Thompson’s one-armed lunch place. His favorite dish is buckwheat cakes with plenty of butter.
While playing at the Rendezvous, he sang so low that Gilda Gray told him “to go get a megaphone.” He did. Now plans to use an all glass megaphone so people will be able to see his face when singing.
His blond eyebrows are not very prominent. Therefore for photographs and stage purposes he pencils in arched eyebrows.
Keeps all strings, bags and papers that he finds. His pockets are filled with bits of paper, cigarette crumbs, throat tablets and burnt matches. Buys every patent medicine that appears. He always carries at least three toothbrushes.
Whenever he takes a girl out to eat he tells her what to order.
Lets his clothes flop wherever he takes them off. Never bothers to hang them up. Is economical. Takes stains out of his suits with a home cleaning fluid.
While playing at the Paramount, two schoolgirls, watching him, decided that they had to meet him personally. Posing as interviewers from a high school paper, they were ushered into his dressing room. As a matter of courtesy, he offered his hand in greeting. One of the girls took it and fainted. The other fell back in a chair—exhausted. The house physician was called, and the girl was revived and escorted to the street. But not until the one who clasped Rudy’s hand let it be known that she was never going to wash the hand that touched her hero’s hand.
His great ambition today is to make one million dollars.
When reading he prefers Western stories. Believes the greatest book ever written to be The Guarded Heights, a story of college life at Princeton, by Wadsworth Camp.
Of all the songs he sings his favorite is “Deep Night.”
On May 11, 1928, he married Leonie Cauchois McCoy. The marriage was annulled the August of that year. He gives every girl the “Grey Dawn” test. Keeps them out until dawn, believing that if a girl looks good then she’ll look good any time.
Has two scars on his body. One is from an appendicitis operation. The other is a bit of gravel in his left knee cap. The result of a motor-cycle accident.
The one thing in life he fears is that some day he will be fat and bald.
If you enjoyed this post, please consider
supporting Cladrite Radio on Patreon