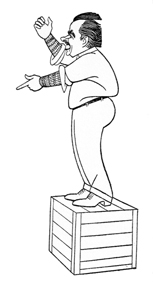 He is always positive.
Has two favorite dishes. One is plain lamb chops. The other is a bowl of wilted lettuce.
Has three daughters. Joan, Constance and Barbara. All began their careers by performing in the movies.
When he rehearsed in Jarnegan he wore only a pink nightgown.
Drinks a quart of Apollinaris water every day on rising. Gets the water free by mentioning it in the play he happens to be in.
He calls the box office from his dressing room before every performance to ask how the house is. Doesn’t give instructions to raise the curtain until satisfied.
Likes to encourage extras. Tells them that he rose from the ranks himself. He never was an extra in his life.
Claims a man’s best friend is his press agent and his worst enemy an ex-wife. He has two of each.
Always does rewriting in which he appears. What Every Woman Knows he believes to be the best play he ever appeared in. Because he didn’t have to do any rewriting with that, he considers Sir James Barrie the greatest writer in the world.
He can talk a great fight. His right hook, however, is a think to duck.
After What Every Woman Knows closed and he parted with Maude Adams, he took advantage of the fact that she was opening in Chanticleer to send her this wire: “I congratulate you on the realization of your fondest ambition—at last you are your own leading man.”
He retires at four every morning. Rises promptly at twelve. Eats only one meal a day. That at six o’clock. However, he loves to act in plays that give him a chance to eat on stage.
Hates interviewers who don’t come armed with complete information about his career. Tells them to consult Who’s Who—which contains only a fragmentary account.
Makes a curtain speech every time he has something to get off his chest. The stage is his soap box.
His luck charm is a white elephant.
If an actor stands in the wings talking while he is acting he invents some excuse to leave the stage. Then tells the actor to stop talking or have his head knocked off.
If the front door of the theater is opened by some peerer-in he stops acting until the glare from the outside has passed. If particularly annoyed he steps to the front of the stage and yells at the person.
His favorite literature is “The Songs of Solomon.”
Wants to be cremated when he dies so he’ll be used to it when he gets there.
Holds a kind of soirée in his dressing room every night after the second act. Has hundreds of visitors. Mostly broken down actors, rich acquaintances and young feminine admirers.
He likes to frighten Boy Scouts.
He counts that day lost when he doesn’t add a new line to the play he happens to be in.
Spends so much time in adjusting the makeup that he never leaves the theater after a matinée. Thus avoids removing and replacing the grease-paint. Passes the time between performances by either sleeping or entertaining.
He plays the piano, banjo and guitar. Believes that he could make a living as a tap dancer.
His wife is his attention caller. She plays solitaire in his dressing room every evening.
He never wore a wig. Dyes his hair to suit the rô. His hair has been blond, black, brown, red and gray.
He insists upon owning the road rights of any show he is in. Quarreled with the Theatre Guild over Playing at Love, later titled Caprice, because of this and quit the show.
No woman with a double chin is beautiful to him.
When traveling he carries with him a necktie board that irons them while you sleep.
He is a man of much talent. Shaves himself. Manicures his own nails. Cuts his own hair.
Once at Texas Guinan‘s night club he drew a Bible from his hip pocket and read it to the assemblage. Everybody kept quiet and listened. He panicked them.
He wears only a green smock when sleeping.
Considers himself one of the ten greatest actors in the world. Has a difficult time naming the other nine. Generally being unable to get past Forbes-Robertson.
No matter what play he is appearing in he never promises to go on for more than one act.
He has one hair growing on each shoulder.
If you enjoyed this post, please consider
supporting Cladrite Radio on Patreon