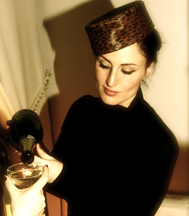 Apart from the obvious influence it has had on your career, how does your interest in the past impact your life (both positively and, if it applies, negatively)?

It makes me evaluate why I value objects one day and forsake them the next. Therefore, it makes me more preservation-minded, and smarter about what I buy. I think of possessions as long-term objects: If they won’t become an heirloom, then they’re not worth having. This is how I approach clothing, too—classic, special pieces only, things that my granddaughters would someday treasure.

There are so many: All About Eve, The Blue Angel, Funny Face—the list is endless. I’m cuckoo about Dietrich and Bette Davis.

We’re aware of a handful of online communities—the Fedora Lounge, for example—that focus on things vintage. Do you often encounter—or even seek out—kindred vintage spirits or pockets of like-minded people in your travels, virtual and otherwise?

I’ve always lived in a comparative vacuum and honestly thought that I was just eccentric in my tastes, until my Let’s Bring Back column came out in 2007 and I realized how many people share my values. I find that people with vintage sensibilities gravitate toward me, I guess because they realize that nothing about my book and life is an affectation. It just genuinely is how I live my life. I’m delighted that there are suddenly so many websites, restaurants, clothing lines, and such that are finding ways to honor the past. I guess that’s further evidence that I was born at precisely the right time in precisely the right place.

One thought on “The Cladrite Interview: Lesley M. M. Blume”