Here are 10 things you should know about model, vaudevillian and motion picture actress Leila Hyams, born 113 years ago today.

In Chapter 19 of his 1930 memoir, Vagabond Dreams Come True, Rudy Vallée addresses the question that’s had us all on the edge of our seats since the first chapter of the book: What type of woman is his dream girl?

THEY say the man who dug the word halitosis out of the dictionary will probably be given a gold statue in the public square by the Listerine people, but the publicity man who seized upon that phrase, “girl of my vagabond dreams” from the song “Vagabond Lover,” and tied me up with a search for a dream girl merits a royal hanging for making me appear an individual in a never ending search for the perfect girl.

One ghost-written article entitled, “Wanted, the Girl of My Dreams,” did convey some of my ideas, but at best they were quite garbled—one part in particular that said I probably would not dare to meet any girl in her home and go to dinner because I feared that she would be ill at ease, feeling that she was with a musical celebrity. This resulted in hundreds of letters inviting me to home cooked meals and assuring me that the authors only wanted me for myself. I appreciate the sentiments of those who wrote me offering meals, and I wish I could have taken advantage of them, as I like nothing better than good, home cooking.
There was another article that again garbled my ideas, but throughout all this I have always felt that the reaction of the public would be, “Who cares what his ideas of a perfect girl are?” and that this reaction would be perfectly justified. After all, why should anyone be interested and for that reason I permitted the appearance of these two specific articles. I know that I am far from perfect and that is the reason that I do not expect a perfect mate. I have certain ideals and hopes but I am not hypercritical or too hard to satisfy. I do hope to find a girl whose ideas and views in the majority of cases are similar to mine, because it is my belief that only people suited to each other can be happy. It is illogical to expect that two people with conflicting temperaments and ideas can live happily in the same house unless one or the other is always willing to make a concession and give in.
While a brunette does quicken my heart more than a blonde, yet I have cared deeply for several blondes and still enjoy their company greatly. A woman’s physical charm is the thing that first attracts me, but unless she has many other wonderful qualities that my mother has, I am afraid we could never be happy. I love an industrious woman, one who enjoys housework, taking care of a thousand and one household things, and likes to cook. I hope to be able to save her from drudgery but if it should become necessary for her to do these things I would want to feel that she loved me enough to accept whatever her lot might have become. That phrase in the wedding ceremony expresses it best of all, “For better or worse.” I would like to feel that were every misfortune conceivable to come upon me, the girl I loved would still stay by me and would be loyal through whatever calamity befell me.
That, I believe, is the real thing. In fact, my conception of love is an indefinable something that cannot be measured, estimated or analyzed. The minute you are able to point out in concrete, physical terms the thing that attracts you to a person, then I say it is not that indefinable something we call love, because if it is something tangible that can be described or named, then the minute it is lost, love ceases; but real love continues long after beauty disappears, when disfigurement or even dismemberment occurs. Love continues under the most horrible conditions and the one who loves will never be able to explain really why.
I do expect and want it to be natural that the girl says she loves me should keep a certain warmth and sweetness for me alone. The woman who gushes and throws herself with abandon into the arms of any man she dances with, disproves for me the statement that she loves me. There is a difference between courtesy and discourtesy, and I expect her to show other people courtesy at all times but not that extreme warmth that should be mine alone.

END_OF_DOCUMENT_TOKEN_TO_BE_REPLACED 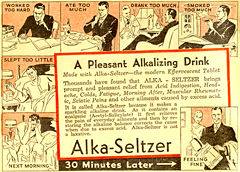 As the Pitch Perfect series continues, we today feature a collection of 1949 advertising slogans that were used to market pharmaceuticals, medical supplies, and laxatives—lots and lots of laxatives. 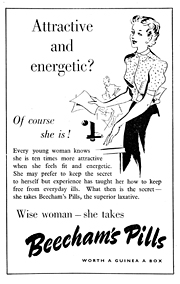 Balanced prescription, The (The Stanback Co.).
Bandage that breathes, The (Sealtex).
Be as regular as a clock (Serutan), Healthaids, Inc.
Beauty laxative, The (Dr. Edward’s Olive Tablets.
Be bright. Feel right. Take Eno (laxative).
Before any date (Listerine).
Better than a mustard plaster (Musterole).
Better than whiskey for a cold (Dr. Miles Medical Co.).
Blessing in disguise (A Tastyeast, Inc.). 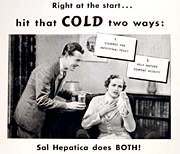 Children are delighted with Astypodyne.
Children cry for it (Fletcher’s Castoria).
Children’s laxative, The (Castoria).
Chlorine ointment, The, better than iodine (Minox Chemical Corp.).
Citrated laxative, The (Howard Jackley Co.).
Cleans teeth all around (The Sealastic Co.).
Cleans them CLEAN (tooth brush).
Cod liver oil with the plus value, The (Scott’s emulsion).
Come over to the easy side of life (Glasglos Laboratories).
Cool off feet with an Ice-Mint treat (foot salve).
Corn-free happy feet (corn salve), Kohler Mfg. Co.
Criminal within, The (Eno), laxative. 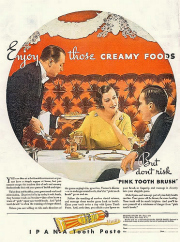 As part of our ongoing series of collections of old advertising slogans, culled from a 1949 book called American Slogans, we today share a list of slogans that were utilized by companies that manufactured and marketed dentrifices (tooth pastes and brushes, denture creams, mouthwashes, etc.):

As long as the danger line keeps healthy, you needn’t fear pyorrhea (Squibb).

Beauty bath for your teeth (Listerine tooth paste).
Be good to your gums (Pro-phy-lac-tic toothbrush).
Bent like a dentist’s mirror to reach more places (Squibb toothbrush).
Be true to your teeth or they’ll be false to you (Medisalt), Carey Salt Co.
Beware of Smoker’s Teeth (tooth paste), Bost Inc., New York.

Child’s face grows to fit the teeth, The (Children’s Clinical Laboratory).
Cleans all teeth underneath.
Cleans as it fizzes (denture cleanser), Fizzadent Corp.
Cleans inside, outside and between the teeth (brush), The Western Co.
Cleans your breath while it cleans your teeth (Colgate dental cream).
Clean tooth never decays, A (Pro-phy-lac-tic tooth brush).
Correct toothpaste, The (Orphos Co.), New York.

Dentally different (Orphos).
Dentrifice that made fine teeth fashionable, The (Dr. Lyons).
Detoxify the mouth every day (W.S. Merrill Co.), Cincinnati.
Do as your dentist does (Dr. Lyons).
Does both jobs: cleans teeth, saves gums (Forhans).

First dental preparations made especially for children, The (Clinical Lab.).
For firmer gums, cleaner teeth (Forhans).
For lazy people (Listerine tooth paste).
For the gums (Forhans).
For the smile of beauty (Ipana), Bristol-Myers Co.
Four out of five get it before they are forty (Forhans).