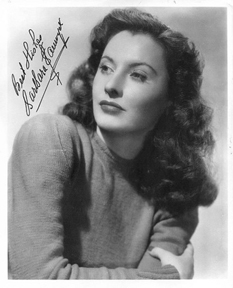 Barbara Stanwyck is TCM’s Star of the Month for December, and really, who could hope for a better Christmas-Hanukkah-Kwanzaa present than that? Wednesdays through December, they’ll showing 55 pictures from her illustrious career and one 1991 documentary, Barbara Stanwyck: Fire and Desire, that tries to sum up what it is that made her so special.

David Thomson wrote of Stanwyck in his Biographical Dictionary of Film: “While she was alive, she did not seem to be one of the great stars. But at her death, it was clear how widely she was loved. She was honest, sharp, gutsy, and smart. Terrific.”

Honest, sharp, gutsy and smart. We don’t think Stanwyck can be summed up any better (though Thomson left out sexy, which she certainly was, and in spades).

The month-long celebration kicks off tonight with 24 consecutive hours of Stanwyck pictures, and it’s fitting that the movies being shown over that span reflect the range and diversity of her work.

From pre-code classics like Baby Face (1933) and Ladies of Leisure (1930) to melodramatic “women’s pictures” such as Stella Dallas (1937) and So Big (1932) and even Meet John Doe, the 1941 Frank Capra classic for which she’s so well remembered today, there’s something for everyone in this initial lineup.

So warm up those DVRs, kids. The divine Ms. Stanwyck is in the house.

And to whet your appetite, here’s a memorably snappy scene from Double Indemnity.