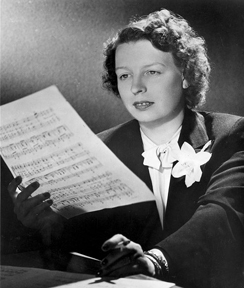 Dana Suesse, whom we hope is celebrating her 103rd birthday today, wherever she may be, was a wonderfully talented composer who might fairly be considered the distaff George Gershwin.

Like Gershwin, she wrote memorably lush tunes that were informed by blues and jazz, and she also crossed over to create orchestral works that reflected the same influences.

Born in Kansas City, Missouri, Suesse toured vaudeville as a child pianist until she moved with her mother to New York City in 1926. There, she studied piano as she began to make her mark as a composer, writing such hits as “You Ought to Be in Pictures” and “My Silent Love.” [CORRECTED] Eventually, bandleader Paul Whiteman commissioned her to write “Concerto in Three Rhythms,” much as he asked Gershwin to compose “Rhapsody in Blue.”

For the rest of her life, Suesse would traffic in both popular melodies and orchestral works. She continued to work right up until the time of her death in 1987.