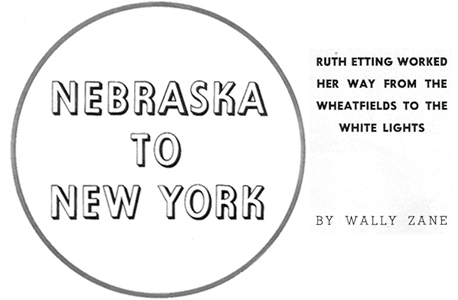 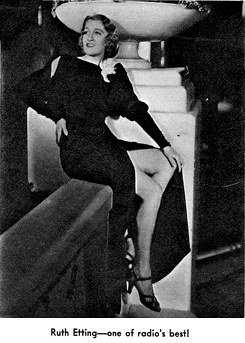 She wasn’t particularly concerned with the thought of being alone in a big strange city. Even if she had been, she would have gone anyway, for she had plenty of determination.
Not so very long after her arrival in Chicago she landed a job designing costumes for a girl show in a cabaret. Her costume designing was all that could be desired and everyone was enthusiastic over her work, but the manager and, what is more remarkable, the manager’s wife noticed that Ruth was the type he liked for his showgirls.
She was a blonde and much thinner than most of the chorines who seemed to get so much fun out of life and the glamour of the spotlight. When the manager offered her a job in “the line,” she accepted it.
The following weeks were hard on Ruth and harder on the manager. She had never danced before and all she knew about the stage was what she had picked up in the course of delivering costume designs and sketching the girls.
Determined not to disappoint her friend and his wife, she worked long and hard to master the intricate steps of the chorus routines. Again her persistence came to her rescue and in a little while she was dancing like the co-ordinated unit that good chorus girls become.
The singing part was a cinch. All of the Ettings sang, although none of them were professional singers. They sang with the naturalness of all outdoors, aided by their correct postures and the lack of nervousness which comes from a life of carefree comradeship in a small village.
Back in David City, Ruth had had the additional advantage of a few lessons from the local voice teacher, but her aunt stopped them when she found that Ruth’s voice was so low that she couldn’t hit high-C. That didn’t bother Ruth at all, at the time because her she wasn’t particularly interested in becoming a singer for she had her heart set on being an artist.
Now those few early lessons were a big help. The cabaret in which Ruth danced also had a vocal chorus and she was one of the singers. It was a big chorus, with an orchestra and a baritone whom they paid $125 a week to sing solos. After Ruth was added to the singing ensemble the manager of the place noticed that the chorus, and one voice in the chorus in particular, kept drowning out the baritone soloist.
Yes, Ruth was the guilty one, so the shrewd manager fired the baritone and advanced Miss Etting to the soloist’s job. However, she was not a real baritone, so her salary was only $50 a week, but it was a lot of money in those days to the little girl from Nebraska.
Ruth become one of the singers who went to the restaurant early in the evening and sang solo, duet, trio and quartet until the last cash customer went home and the box on the piano was “broken” to divide the tips of the evening. Singing quietly, with her voice pitched low, she had excellent opportunities to become proficient as a crooner.
One evening Thomas G. Rockwell, then recording manager for the Columbia Phonograph Company, heard her sing, “What Can I Say, Dear, After I Say I’m Sorry?” at the College Inn, Chicago. He thought she was swell and signed her to a long term contract. Soon the Ruth Etting records were among the biggest sellers in the country. The same Tom Rockwell is still her manager today.
Irving Berlin and Florenz Ziegfeld listened to her recording of “Blue Skies” one night and the next day Zeigfeld’s general manager was on his way to Chicago to sign her up for the “Ziegfeld Follies” of 1927. She came to New York and stayed for the “Follies” of 1928, “Whoopee”, “Simple Simon” and the “Follies” of 1930 and 1931.
Often, since then, Ruth Etting has been chosen in national radio polls as the best singer of popular songs on the air and has starred in a number of moving pictures and on several commercial radio programs. Currently she is featured on a National Broadcasting Company coast-to-coast hook-up each Thursday evening.
If you enjoyed this post, please consider
supporting Cladrite Radio on Patreon