“My Melancholy Baby” is one of those standards that most folks over a certain age have heard of, but few could, if pressed, sing (we can, we’re proud to say, if only in our atonal, pitchy way). It’s a familiar song title, in other words, but no longer such a familiar song.

We’re guessing even fewer people could name the song’s composer.

But as we learn in today’s Snapshot in Prose, originally published in 1935, “My Melancholy Baby” was a recurring hit for three decades running in the early years of the last century, the greatest claim to fame for songwriter Ernest Burnett. Burnett, who served in World War I, was once thought to have died in that conflict—no less a figure than Paul Whiteman even announced as much over the radio, as Burnett lay recuperating from tuberculosis in a government-run sanatorium in Arizona—but he came storming back to Broadway to resume his career, and not without success.

But “My Melancholy Baby” remains, to this day, his crowning achievement.

Read to the bottom of the profile, and you’ll find a couple of renditions of the song for your dancing pleasure.

ERNIE BURNETT, a soldier in the World War, composer of the famous song, “My Melancholy Baby,” was lying on his cot in a government sanatorium, out in the hot desert country of Arizona, where the cacti bloom. His thoughts were of New York, Tin-Pan Alley, Success, Romance—his broken dreams.
Hoping to cheer up his spirits with some lively music, he tuned in his radio. Suddenly—
But listen! Paul Whiteman is speaking. He is saying—that he and his band are now going to play one of the greatest of all popular songs. A song that is destined to become immortal—to be incorporated some day into an American opera—“My Melancholy Baby.”
Paul’s voice grows a little pensive: “And,” he adds, “the composer of the song, a soldier, died of tuberculosis.”
The wan, sick man leaned toward his radio, and said, “No! No! I—Ernie Burnett—am not dead! Not by a long shot!”
The amazing statement that had just come over the radio, under the circumstances, might have made some of us feel pretty sorry for ourselves—but not Ernie Burnett.
It had been such a long time since he had enjoyed the plaudits of Broadway, that at first, he tried to kid himself into believing that he was accustomed to being forgotten. 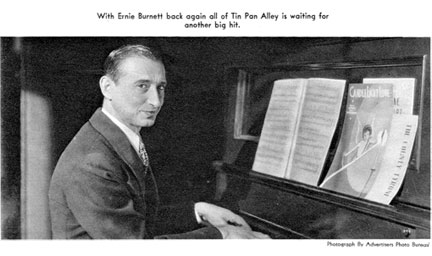 Bernie Cummins and His Orchestra — “My Melancholy Baby”