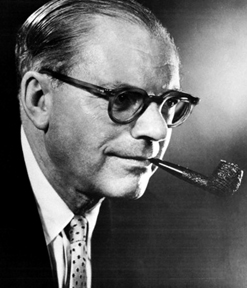 Here at Cladrite Radio, our focus is primarily on the first five decades of the twentieth century, but we do from time to time dip our toes into the 1950s (and even the ’60s, occasionally).

We can think of no better excuse to bend our “rules” than the chances to share this audio interview with publisher, author and What’s My Line? panel mainstay Bennett Cerf, recorded in January 1968, just months after What’s My Line? came to an end.

When the Game Show Network was airing What’s My Line in the wee hours of the morning on a daily basis, we watched the show religiously, thanks to the wonders of Tivo. (Thankfully, Ms. Cladrite is also a devoted fan, so much so that we even gave her signed editions of one of Cerf’s joke collections and Arlene Francis‘s 1960 memoir/self-help tome, That Certain Something: The Magic of Charm, one Christmas.)

If you’re a fan of What’s My Line?, you’ll enjoy Cerf’s reminiscences immensely. If you don’t know the show, you’ll find plenty of episodes on YouTube. But we warn you—it’s habit-forming.

The audio interview shared below is in three parts, totaling around 25 minutes; you’ll want to listen to all three.