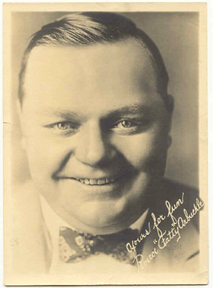 Arbuckle also gave Keaton his first work in motion pictures in the 1917 effort, The Butcher Boy. The two went on to be a successful and popular team until Arbuckle departed for Paramount.

Arbuckle also gave Bob Hope an early break, using him as an opening act in his 1927 comedy show and setting him up with contact info for some of the influential people Arbuckle was friendly with in Hollywood.

In 1921, while vacationing in San Francisco, Arbuckle and a couple of friends rented a suite of rooms at the St. Francis Hotel and invited a number of young women to them for some carousing. During the festivities, one young woman, an actress named Virginia Rappe, fell ill. The hotel doctor adjudged her to be intoxicated and gave her morphine to calm her.

Two days later, she was admitted to the hospital and later died of internal injuries. Arbuckle was accused of raping her and causing the injuries and her death. In the first two of three sensational trials, the juries came back deadlocked and a mistrial was declared in both instances.

By the third trial, Arbuckle had received so much bad publicity that his films were banned and his career was in complete free fall. Though it took the third jury just six minutes to acquit Arbuckle—they even wrote a statement of apology to be read in court to Arbuckle—the damage was done and Arbuckle’s career in ruins.

Arbuckle was eventually given some directorial work under the alias William Goodrich, and in 1932, he filmed six talkie shorts for Warner Brothers. Those films were successful enough that on June 29, 1933, Arbuckle signed a contract with Warners to make a feature film—he proclaimed it the happiest day of his life.

Sadly, he died in his sleep of a heart attack that very night at the age of 46.

Luckily, we still have a number of Arbuckle’s films to remember him by, and it gives us great pleasure to give away three copies of The Forgotten Films of Roscoe “Fatty” Arbuckle, a four-disc boxed set. Entries are being accepted throughout the month of March, with the three lucky winners being announced in early April. Enter early and often!