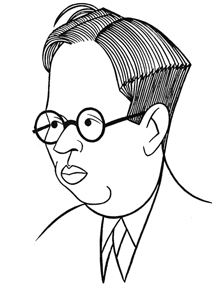 He has red hair. Shaves at least once a day. However, he has to be told to take a haircut.
He likes to go for long walks, wander through museums and look out of windows.
Graduated from public school. Went halfway through high school. He has no recollection of learning anything there of value to him. Later studied law. When he was admitted to the bar he quit the profession.
He is married and has two children—Robert, aged twelve, and Margaret, aged nine.
Hates to get up in the morning. His friends know enough never to disturb him before ten-thirty.
When he finished writing Street Scene he was critically ill. His wife peddled the play, bringing it first to the Theatre Guild. They rejected it and so did John Golden, Jed Harris and Arthur Hopkins. The news that Street Scene had been rejected by these producers was kept from Rice until he recovered from his illness. An agent sold the play to William A. Brady.
He has never been to a night club and never intends going.
Doesn’t care for the theater. He attends about three times a year and then sees musical comedies. Recently, because he has to cast two plays next season, he has been going to the theater three or four times a week. He has yet to see the third act of a play this year.
His name was Elmer L. Reizenstein. The L is for Leopold.
He owns some bum oil stocks.
The first time he ever went to the theater was when he was eighteen years old. Three years later he wrote his first play. It was On Trial. Similar to Street Scene, it was rejected by almost every producer, and then was a big hit when finally produced by Arthur Hopkins. William A. Brady was one of the many who rejected it.
Is especially fond of fat German pretzels and beer.
Writes his plays in longhand. Then gives them to his secretary to type. He hates to rewrite and seldom does. It took him three months to write Street Scene.
He is not interested in baseball, football or boxing. He never plays golf or bridge. Occasionally he goes to the race track, but he never bets.
One of his great joys is reading poetry aloud to his kiddies.
He is lazy. His motto is: “Never put off doing anything today what you can put off doing until the day after tomorrow.” Once he starts, he works intensely, often for ten hours at a stretch.
The most tragic event in his life was when, at the age of eight, he proudly walked out of the house wearing his first derby hat only to have it and himself beaten up by the rough boys of the district.
He doesn’t talk much.
He lives in a hotel. He loathes home-cooked meals and always eats in restaurants.
Some of the other plays he has written are The Home of the Free, For the Defense, The Iron Cross, Wake Up, Jonathan (written with Hatcher Hughes), It Is the Law (written with Hayden Talbot), The Adding Machine, Close Harmony (written with Dorothy Parker), The Mongrel, Cock Robin (written with Philip Barry) and The Subway.
He has never voted.
His pet hate is the movies. Believes that they have no future. He once worked in Hollywood for two years. He wrote Doubling for Romeo, the picture in which Will Rogers appeared.
The set used in Street Scene is an exact copy of 25 West Sixty-fifth Street.
He would rather live in Naples than any other place in the world.
His lawyer when selling the movie rights to On Trial, twelve years ago, inserted a clause in the contract that the talking picture rights were to remain the property of the author. The movie magnate, who didn’t know what talking pictures were, readily agreed to this condition. Recently, Rice sold the talking picture rights to On Trial for a huge sum.
His hobby is painting with water colors.
When he wrote Cock Robin with Philip Barry, the collaboration was done entirely by mail. They exchanged drafts of the acts until both were suited. The authors never saw each other until the play was completed.
He never puts sugar in his coffee.
He learned that he had won the Pulitzer Prize a week before the official announcement. Of course there was much joy and excitement in the Rice household. Not wanting the news to get out, he pledged everyone to secrecy. However, he was a little afraid that his son, Robert, would boast about the prize to his schoolmates. He called Robert aside and warned him privately. Robert listened attentively and then replied, “Who wants to know, anyway?”
He hates Broadway. He thinks it’s the cheapest place in the world.
If you enjoyed this post, please consider
supporting Cladrite Radio on Patreon