Guideposts is a magazine that was founded in 1945 by Dr. Norman Vincent Peale, author of The Power of Positive Thinking. Over the years, the publication has run many stories by stars and performers from the Cladrite Era, and we thought we might share one of them with you every now and then…

Wish You Were Here by Irene Dunne (December 1951) 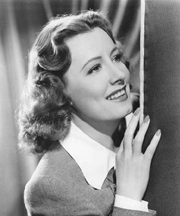 At an evening party in my home several months ago, a fascinated group gathered around former Congresswoman Clare Booth Luce, who held her audience, not by brilliant discourse on politics or the theatre, but by her eloquent statements on her personal religious convictions.

An elderly gentleman smoked his cigar and listened quietly. When the party broke up, he turned to me and, shaking his head admiringly, he said, “You see, she’s just too smart not to be on the safe side!”

I was amused, but later on, as I went about ashtrays and putting out lights, I thought again about my guest’s remark. What he doubtless meant to say was, “She’s too smart not to be on God’s side.” How hard it is for most of us to talk about our religious feelings, I mused. But to tell others about them, to share your treasure, is so important, for surely the best way to keep your religion is to give it away freely.

Now I am no theologian, no scholar, not even a writer. I ask myself, “How can I find a simple, uncomplicated, sincere way of telling others about the richness, satisfaction, and joy that my religion brings to my life, so that they, too, may desire to open the door and let God in?”

Then it occurred to me it was something like seeing your friends for the first time since your return from a wonderful trip—let’s call this a heavenly trip. You had such a glorious time, you’ve already sent post cards, saying, “Wish you were here.” If you have the gift of words, your description of the place will make them want to go.

Even if you have not the gift, they will note that your trip has refreshed and restored you; your step is buoyant, your heart is light. The place where you have been, and still reside in secret, has done so much for you that all who come in contact with you will yearn to go there too. They want their cup filled to overflowing as is yours.

And the wonderful part of this heavenly trip is that everyone can go. Of course, the trip will entail sacrifices. Pleasures nearer home may have to be foregone; perhaps what may seem like valuable time will be taken away from the office or from social engagements. And the journey may take a long time. It all depends upon the person and the way he chooses to go about it.

For my own part, I can recount for you no dramatic stories en route. I did not, like Saul of Tarsus, suddenly awaken to find myself already in the Heavenly Place. Nor did tragedy or affliction force me to be towed in, or sirened in by ambulance, as has happened to so many. Neither did I have to search long and hard for the right road as did Thomas Merton who tells about it in “The Seven Storey Mountain.”

No, I was placed on the road at an early age, and it was straight and narrow and pleasant, though I suppose I made a few detours here and there and from time to time I took more rest than was necessary.

I was born into the Catholic faith at Louisville, Kentucky, and there was schooled by the Sisters of Loretta. Early in my youth I began to study voice and piano. I can remember attending early Mass, then going to a nearby Baptist Church to sing in the choir. I took my religion entirely for granted.

On the opening night of my earliest musical show years ago, I was observed from out front, making the Sign of the Cross before my entrance. I had no recollection of this whatsoever. That’s how automatic, yet so much a part of me, my religion was.

The process by which I began to be happily aware of its enormous benefits to myself and others and to consciously try to practice it in my daily living, has come about very slowly, but I hope, just as surely.

Folks often ask me wonderingly how I have managed to keep my balance in the tinsel world in which I have lived. It is no wonder that those who are suddenly smothered in unaccustomed luxury and adulation are sometimes inclined to lose their sense of values and are tempted to play God themselves. Bishop Fulton Sheen says: “Twentieth Century man who thinks he is a God has to be psychoanalyzed to find out why he feels like the devil.”

In my own case I had the good fortune to be kept on the beam by the prayers of my saint-like mother. My father, a river steamboat man who became a United States Supervisor of Steamships, died when I was very young. Mother and I moved to Madison, Indiana, and I studied at a musical conservatory in Indianapolis.

While on my way to East Chicago to take a job as teacher of music and art in high school, I stopped to visit friends in Chicago. Just by chance I read where the Chicago Musical College was holding auditions for young singers, the winner to receive a scholarship.

I tried out, and to my astonishment—won. This encouraged me to try to become a singer in the Metropolitan Opera Company in New York City, and shortly Mother and I were on our way to New York.

I never did get to the Metropolitan, but the decision started me on my career. Throughout my working years in motion pictures, Mother’s steady faith has been an unfailing source of strength to me.

Her death a number of years ago was the most shattering personal blow I have ever had to bear. My mother’s presence and her prayers for me, like my religion, were something I had possessed all my life and taken too much for granted. How alone I would have been at that time if she had not pointed the way to another Comforter who would never leave me!

It is not alone in the crises of life that God has sustained and strengthened me, but also in day-to-day living problems, the unending decisions and petty annoyances. Most of us have grave responsibilities to our marriage and our children. I, for one, wouldn’t have the nerve to attempt to bring up my daughter without God’s help. To do so would seem to be the most incredible egotism!

Out of my heart and my own experience, I know that God has infinite treasure to bestow. The joy and peace of mind that accompany love of God and faith in Him are beyond the power of words. Because of my religion, I know that I have lived a richer, fuller, more satisfying life than would have been possible without it.

With all its hardships, the journey is worthwhile. Faith is a wonderful resort. How I wish you were here—if you’ve missed it!