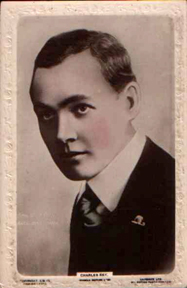 Charles Ray was a popular juvenile film star for the Thomas Ince studio in the 1910s who eventually broke away to form his own production company so that he might break away from the rural youth roles in which he’d been typecast. His 1923 production, The Courtship of Myles Standish (1923, now considered a lost film), was an expensive bust, and Ray lost everything.

Ince helped Ray get back on his feet by offering him some roles, but Ince’s death in 1924 forced Ray to resort to working in low-budget “Poverty Row” productions, and he had trouble finding a niche after the advent of talking pictures. In the 1930s, he settled for minor, unmemorable roles to pay the bills, and launched various other endeavors, among them the Beverly Ray Cultural School (located at 5537 Hollywood Blvd. and named after Ray’s wife), where Ray promised prospective students he would “personally analyze your talent and chart a practical program for you.”

In 1936, Ray began publishing Charles Ray’s Hollywood Digest, a compendium of Tinseltown-related “stories or story excerpts, a full page of knock knock jokes, puns, odd, random facts or trivia, recipes, small film reviews, cartoons, etc.” (The Daily Mirror). The cost of the 96-page first issue was 40 cents (a 13-month subscription could be had for $5). And that issue featured an advertisement for Hollywood Shorts, Ray’s book of short stories (it could be had for a mere $2.50).

Sadly, there was to be just one more issue of Hollywood Digest. Thereafter, Ray continued to muddle through playing only occasional small roles in pictures until his death in 1943 of an infection caused by an impacted tooth. Ray was 52 years old and all but forgotten.

But we remember him. And we’re pleased to bring, on a weekly basis, the stories from Hollywood Shorts.

*    *    *
crossed by sweeping hordes. Castle walls crumbled and drawbridges collapsed at the command of the forces plying the battering rams and catapults. The successful engines of war cleared the path for a new master. The city fell. Then a king rode a white horse through the conquered streets while the populace bowed mutely in obeisance. Former first citizens were made slaves. Replacing horses, they drew heavy chariots containing the conquerors, and silently bore their cross.
“Now the baby!” the director shouted. “That intimate touch will get them. That heart appeal!”
“Call the baby!” the assistant commanded.
“Call the baby,” the casting office relayed.
“Okay, the baby,” the mother responded.
Innumerable scenes were shot with the baby crying, laughing, gooing, and playing at the feet of the king.
The king was human; he melted. Life’s great miracle, in a cradle, had done it. The city was restored. The monarch rode away at the rear of his armies, signifying his sackcloth-and-ashes repentance.
The picture ended with great gusto. The cutting ensued. The editing was completed. Executives previewed it “on the sneak.” It was rotten.
“Call the baby!” the director shouted.
“Call the baby,” the assistant commanded.
“Okay, the baby,” the mother responded.
New sets were built, and whole sequences were taken over. Carpenters toiled. Painters smeared. The castle was reestablished, the battered walls were mended, the drawbridges were repaired, the moat was filled with water; then an army swarmed like bees about the battlements in deathly siege.
“Now the baby!” the director demanded and took:
Shots to the right of it,
Shots to the left of it,
Shots in front of it,
Volleyed and thundered,
Stormed at with shot and shell,
Bravely he filmed and well,
But his ego made him say “swell”
While horse and hero fell,
Into the camera range
Hitting the ground like hell,
And still he blundered.
The picture was cut and previewed again. The critics their way. The first-nighters guffawed. The director slumped. The studio went morbid. The assistant went haywire. The prop man went alcohol—and the producer went mad.
Weeks passed. Months passed. The cutting and editing continued. Sincere endeavor brought improvement. Having lifted the depression somewhat, the director gained the producer’s confidence again and shouted:
“Call the baby!”
“Call the baby,” the casting office relayed.
“Baby doesn’t live here any more,” a new voice answered.
In muffled whispers to the prop man, the assistant confided: “What do you suppose we will do?” The casting office is passing the buck ’cause they failed to get the baby’s new address. If I tell the chief that, he’ll can me. He always slips me a bonus at the end of each picture, and but proviso is that I never fail him.”
The prop man uttered an inspiration.
“Fix it up with the casting office by takin’ the blame. Tell ’em to keep mum, sayin’ that the baby’s sick. Then you and me will start an African hunt. Okay?”
“What a pal!”
Weeks passed.
“Do I get that baby?” the director shouted. “If it’s still sick, I’ll photograph it that way. That’s a swell idea!” and he hurried to confer with the scenario chief.
“Goodbye, pal,” the assistant whispered to the prop man. “I’m headin’ for the last round-up. I’m handin’ in my resignation. It’s all over with me.”
“What in hell you doin’ that for?”
“I got to take the rap. I got information that I don’t dare reveal. The staff couldn’t take it from a goof like me. So I’m washed up.”
“You don’t have to be afraid of me. Spill it.”
“Nope, I don’t dare stay around any more after explainin’. So why explain? Let ’em find out for themselves.”
He winked sadly.
“Come on, pal. Give.”
“Okay, but you better keep mum. Funny cracks will get you thrown out, you know. Listen to this one. It’s the only thing that’s colossal about this funny horse opera. We’ve been on this picture about two years, all in all, haven’t we?”
“Yeah, maybe a little more. Why?”
“Well, nobody on this lot has ever tumbled to the fact that a baby grows up. They’ll die when they realize it. I found the new address today, saw the baby we used and am I dumb like the rest? Why, the kid’s nearly got whiskers.”