Charles Ray was a popular juvenile star in the 1910s and ’20s, but by the ’30s, his career was on the rocks, and he turned to writing. Here’s another in a series of offerings from his book, Hollywood Shorts, a collection of short stories set in Tinseltown.
*    *    *
As Told at the Masquers Club
“Aw, give ‘im the works, boys. He’s nuts!”
“Harold, you’re crazy! You’re going soft-hearted, or soft-headed, I can’t tell which!”
“Why don’t you put your altruistic theories into practice? You’re daffy as a loon, and someday they’ll drive up and take you for a ride—to a place with a tall iron fence.”
At the Hollywood actors’ club, a small group were seated in the lounge kidding Harold Wild.
Harold was an actor of prominence. His friends understood his place on the screen and his excellent portrayals, but not his multivocal rantings on the conventionalism of life which, as he averred, kept people from being themselves—their real selves.
“It’s a silly old world,” he often contended. “It’s human beings that make existence so miserable.”
Harold Wild was not a character that his name might imply. But he made himself very obnoxious around the club with his theoretical chatter, and so they avoided him—called him “Softy” Wild.
Weeks passed.
Gradually his friends noticed a great change in him. A little caused him to give in and tell a story concerning himself.
One stormy night, while driving along Hollywood Boulevard in the warm confines of his roomy sedan, he was speculating seriously on why it was, in such a nasty rain, that a man could not throw open his car door and offer a lift to any woman in need.
Conventionalism is the answer, he sneered. He had passed up three women at crossings in the last four blocks. Silly conventionalism was the curse of the human family, he thought, stifling a world which might otherwise be a happy playground. What an infantile existence this life really was!
And so he argued on until conscience demanded action. A firm conviction gave him peace of mind: at the next intersection he would do this chivalrous thing without thought of race or age. No one could accuse him of being a masher. His attitude would show that it was all purely an impersonal gesture.
The red light of the traffic signal bloomed into prominence through the veil of mist on his windshield. Slowly he eased his car nearer to the curbing, and through the rivulets of water streaking the glass door, saw a sight which made his soul vibrate with compassion.
“What a crime!” he mumbled.

Sitting on a bus bench in a miserable attitude, a woman was trying to house herself waterproof by holding a newspaper roof-like over her head. Pathetic, he thought sincerely, and threw his car door open in welcome.
“Madam!” he shouted quite reverently. Then he stammered: “I’d like to—would you—it’s just my way of—“
The rush of rain down his coat sleeve demanded simplicity, and he intelligently succumbed.
“May I have the privilege of giving you a lift?” he achieved without stuttering.
Dropping the soggy newspaper, the girl rose and skipped the distance to the car quickly, entering with a mumbled “thanks.”
The signals changed. The traffic moved on. Harold Wild cleared his throat and expressed his elation.
“I’m very happy that you accepted my offer of a lift. This conventional business is silly, isn’t it? Now if you’ll just tell me your destination, I’ll not even bother you with conversation.”
“I can’t see very well,” she mumbled, peering through the glass. “It’s only a few blocks. I suppose I had better watch closely and tell you when to stop.”
“Live right on the corner?”
“Why, no, it’s about a hundred steps off the boulevard. Five or six doors, anyway. Could you go that far out of your way?”
“Certainly. Just tell me when to turn.”
A warm, happy feeling surged through Harold’s body as he felt conscious of the girl’s eyes upon him. His altruistic attitude held him in certain bounds, but through the dark mirror of the windshield, he was able to steal glances at her shadowed form.
With pleasure he recorded that a blonde head crowned a facial contour well chiseled, possessing large eyes which surely must be blue. Her chic hat, well wilted by the rain, caused him to hurl more fiery thoughts against the outrages of conventionalism. What a lovely thing she was! He meant to say something about the condition of her collapsed hat, but when his mouth opened, it asked:
“What’s your name?”
What made him say that, he thought. Immediately astonished, his blood congealed; but relief came when he heard her answer:
“Elaine.” Then she added: “This is it. Turn here, please.”
“To the right,” he managed with a gulp.
“Yes. It’s a dark street, isn’t it? Wonder why they don’t light side streets better?”
“Politics!” Harold answered freely, turning off the boulevard. “You always find politics at the bottom of everything. Why, it’s a shame to allow women to go about with such lack of protection.”
Gradually he slowed the car up to the curb where the girl was pointing. Reaching behind her shoulder to flip the door open, he experienced surprise in viewing nothing but a vacant lot. He was further surprised when he became conscious of gazing down the barrel of a baby automatic.
“Give me your wallet!” the girl commanded calmly. “Hand over your extra change too. I’ll take that ring and those cuff links. Add the wrist watch, and make it snappy!”
As he watched his companion bow out of the car, his ears rang with some hissing phrases, quite humiliating.
“Don’t look back until you get around that next corner,” she advised strongly. “Thanks for the buggy ride, and for not being conventional. My name’s really Elaine. Next time you should pick up Ethyl. Much faster, they say.”
Slamming the door, she disappeared in the rain. 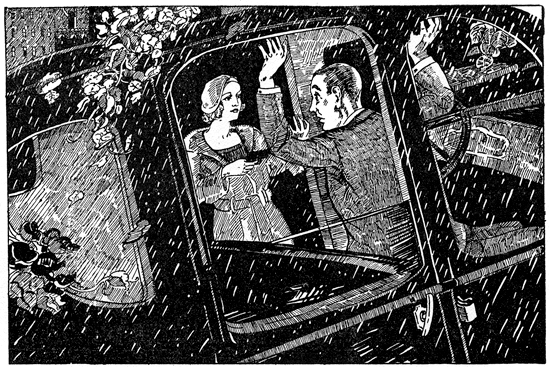 Harold Wild sped to the lighted boulevard while cold chills and odd, indescribable emotions played a strange tattoo upon his body. As he got settled into traffic, his mind seemed to refuse to function. No phrase, however profane, would formulate into suitable expression. He wasn’t one to talk to himself. But presently his dry throat relaxed, his mouth moved, and from the depths of his diaphragm came the energy to form the humorous declaration which crossed his mind.
“Well, I’ll be a dirty name!” he exclaimed, and kept his car in the middle of the street.
< Read "Unseen Faces" | Read “Murder at the Studio” >
If you enjoyed this post, please consider
supporting Cladrite Radio on Patreon