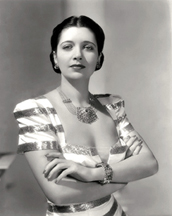 On Wednesday, TCM again honors Francis with what has become an annual birthday tribute, airing nine of her pictures between the hours of 7am and 8pm. Though TCM has omitted some of Francis’s best work from the tribute this time around — she’s wonderful in the Ernst Lubitsch classic Trouble in Paradise, and she excelled when paired with William Powell in several pictures in the early Thirties, especially the romantic comedy Jewel Robbery and the tear-jerker romance One Way Passage, both released in 1932 — you should, if you’ve never been exposed to the glamor and grit that is Kay Francis, be readying your Tivo, even as you read this, to capture all thirteen hours of the tribute. (Those who are already Francis fans won’t need the above nudge.)

1:15 p.m. — WOMEN ARE LIKE THAT (1938)
Years after their break-up, a couple finds each other all over again. Cast: Kay Francis, Pat O’Brien, Ralph Forbes. Dir: Stanley Logan.