Kay Francis was born 111 years ago tomorrow (in, we’re proud to tell the world, our own hometown of Oklahoma City), but we’re mentioning it today so that you’ll have time to make room on your DVR for the 10 of her movies in a row that Turner Classic Movies is showing beginning at 6 a.m. ET Wednesday morning.

We’ve shared in this space before how fond we are of Kay’s oeuvre. Her movies, once called “women’s pictures,” would likely be dubbed “soap operas” by most observers today, but whatever tag you choose, the chance to see Kay suffer (she almost always suffered), adorned all the while in elegant gowns designed by the likes of Orry-Kelly and Adrian, is one not to be missed.

TCM is airing the movies in chronological order, which is a nice touch the channel doesn’t always employ, though we regret to inform you that the Ernst Lubitsch classic Trouble in Paradise is not among the pictures being shown. But six pre-code delights are, including Jewel Robbery (1932) and Mandalay (1934), both of them not to be missed.

But honestly, it’s Kay Francis! None of the 10 are to be missed!

Happy birthday, Kay, and thanks for the memowies! 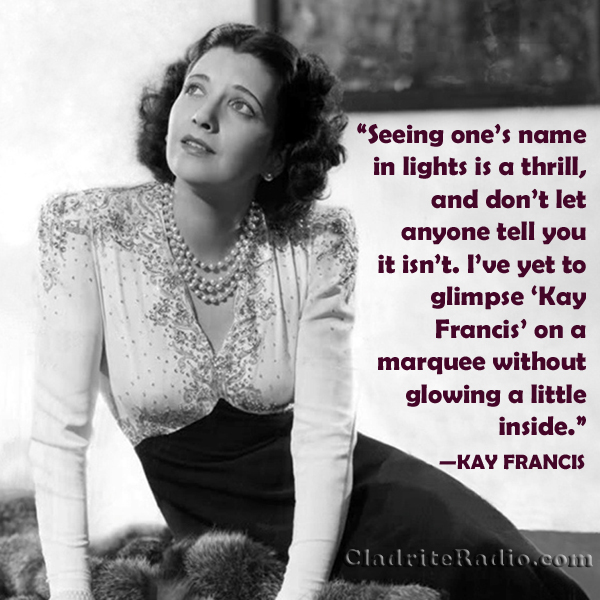