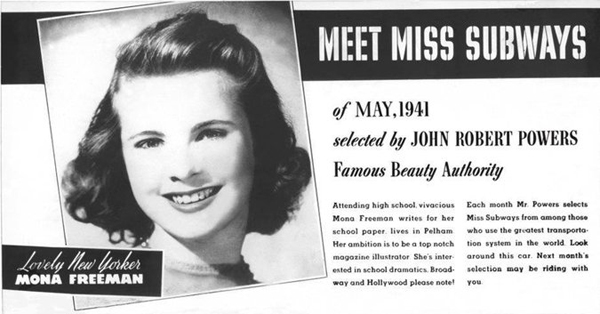 We came across, as perhaps you did, too, a notice or two that actress Mona Freeman had passed away at the age of 87. Hers was a relatively modest career, though she had some well-known projects among her credits.

After giving up acting, she devoted herself to painting, and not without success. Her portrait of Mary See, the mother of the founder of See’s Candy, a California-based company, can still be seen in many of the chain’s more than 200 shops across the country.

But what we didn’t know is that Freeman was, in 1941 and at the ripe old age of 14, named NYC’s very first Miss Subways (this despite the fact that she’d never ridden the subway at the time), which meant that her photograph appeared on a poster that was seen by millions of straphangers daily.

The Miss Subways program, undertaken to draw riders’ eyes to the advertisements that line the walls of commuter-filled cars, lasted until 1976. Approximately 200 young women were afforded the honor over that span.

But the very first of them was Mona Freeman, who died in her home in Beverly Hills on May 23.