365 Nights in Hollywood: Kalsomine Kitty of the Kleigs ⋆ Cladrite Radio
Skip to content
Jimmy Starr began his career in Hollywood in the 1920s, writing the intertitles for silent shorts for producers such as Mack Sennett, the Christie Film Company, and Educational Films Corporation, among others. He also toiled as a gossip and film columnist for the Los Angeles Record in the 1920s and from 1930-1962 for the L.A. Herald-Express.
Starr was also a published author. In the 1940s, he penned a trio of mystery novels, the best known of which, The Corpse Came C.O.D., was made into a movie.
In 1926, Starr authored 365 Nights in Hollywood, a collection of short stories about Hollywood. It was published in a limited edition of 1000, each one signed and numbered by the author, by the David Graham Fischer Corporation, which seems to have been a very small (possibly even a vanity) press.
Here’s “Kalsomine Kitty of the Kleigs” from that 1926 collection. 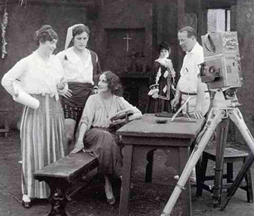 When they made Tommy Green a director the sun beamed a satisfied smile on the big white stages. The birds which infested the trees along the avenue running through the studio, talked about it in chirps.
The white-haired gateman stepped from his self-made pinnacle of pride and told the extras in the waiting room.
The noon whistle seemed to scream its congratulations at twelve o’clock.
They had finally made Tommy Green a director.
It was discussed over the lunch counters, in the studio cafeteria and over the white tablecloths at Mother’s Inn.
Everyone was talking about it.
Everyone was glad—glad for Tommy.
After eight years he had gained the position he had always dreamed of and worked for. Yes, it had been worth while. It seemed a long time, and Tommy had struggled hard. But it had not been in vain after all.
Eight years ago he walked into the studio and asked for a job. Lady Luck had presented him with a prop assistant’s broom and apron and told him to work eight hours a day for twenty-five dollars a week.
Today his salary began with fifteen hundred dollars a week. His contract stated this for one year and an option on five years.
Tommy sat gazing out of his new office window into the studio street. Electricians with leather vests scuffed by. Office boys with Oxford-bag trousers and patent leather shoes strolled slowly, carrying notes to directors.
Girls flickered past in fashion’s latest, carrying manila envelopes with photographs. Some had make-up kits.
Old men with unpressed clothes and Merry Christmas whiskers hobbled by. Young men with highly polished hair and trick suits wandered up and down the street.
Trucks with props whizzed back and forth.
Actors with pink make-up and funny looking clothes hurried from stage to stage. An orchestra was playing “Hearts and Flowers” on Stage One.
On Stage Two a snow scene was being put on. The cameraman cranked away in his shirt sleeves while an electric fan played upon him.
The girl in the salt snow shivered and thought of an ice cream soda.
Tommy looked at his stenographer who wore massive earrings. She was typing out the working synopsis of his first story.
He was to begin casting his players that very afternoon. He dreaded to think of it.
His assistant rushed in. Said something. Tommy nodded, not knowing what for.
He had suddenly remembered a faithful promise. He tried to lose the thought, and to no avail.
There was Kitty.
Eight years ago he had made a promise. He must keep it. But how?
He frowned. Kitty—Kitty Colton, the girl he had loved for—well, ever since he had laid his eyes on her. Eight years at least.
He had promised if he ever became a director—a real honest-to-goodness motion picture director, that he would put her in his first picture.
That had all sounded nice—then. But now it was different. Would she understand? Perhaps he could explain.
He would go down to the local stock theatre this very night and tell her. Go to dinner after the performance and dance. That would make it easier.
Tommy could tell her amid the gay laughter of pleasure-seeking people. He would tell her while he held her in his arms. While their feet slid smoothly over the polished floor in time with the sobs of a silver saxophone.
While the drummer bounced pine sticks on a cannibal tom-tom. While the violinist drew a jerky bow over his fiddle. While the clarinet player squeaked a noise like an India snake charmer. While the pianist tapped lightly on black and white keys.
He would tell her then.
But could he?
Tommy wondered. . . .
Kitty had always used too much powder and rouge. The stage had done that for her. And just could not photograph well.
And then she wasn’t such a good actress.
Tommy knew all of this, but he loved her. And then he had promised.
How could he work it?
Even if he cast her in a small part, it would hurt the picture. His hopes of a perfect production tumbled like air-castles.
He must explain some way.
After the performance and he had told her of his new contract, she had hugged and kissed him right in front of the theatre.
And then she had powdered her nose again.
Tommy had opened his mouth three times to tell her while they were dancing. And he had closed it three times without a word.
They were riding home. Kitty was chattering away at what wonderful things he was going to do.
She announced suddenly that she was going to give up the stage for good now.
Tommy’s heart almost stopped beating. He gulped and stuttered nothing.
The next morning Kitty left off a little of the usual make-up and handed in her resignation to the stage manager.
She then picked out a tiny band ring and had it laid away. She telephoned a real estate dealer from the furniture store where she had selected house furnishings.
Kitty then purchased a cook book and a can opener.
She called Tommy at the studio and told him to meet her at the Court House.
That evening Tommy Green felt sorry for D. W. Griffith when Kitty had finally turned her back on the Kleigs—and became his wife.
If you enjoyed this post, please consider
supporting Cladrite Radio on Patreon