365 Nights in Hollywood: "Cupid's Corner" ⋆ Cladrite Radio
Skip to content
Jimmy Starr began his career in Hollywood in the 1920s, writing the intertitles for silent shorts for producers such as Mack Sennett, the Christie Film Company, and Educational Films Corporation, among others. He also toiled as a gossip and film columnist for the Los Angeles Record in the 1920s and from 1930-1962 for the L.A. Herald-Express.
Starr was also a published author. In the 1940s, he penned a trio of mystery novels, the best known of which, The Corpse Came C.O.D., was made into a movie.
In 1926, Starr authored 365 Nights in Hollywood, a collection of short stories about Hollywood. It was published in a limited edition of 1000, each one signed and numbered by the author, by the David Graham Fischer Corporation, which seems to have been a very small (possibly even a vanity) press.
Here’s “Cupid’s Corner” from that 1926 collection. 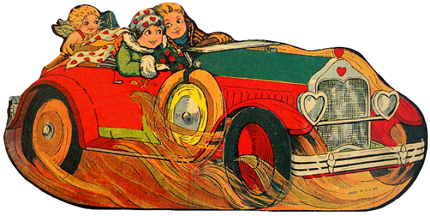 It might be called the Avenue of Affections, the Street of Secrets, the Boulevard of Beauty, the Road of Romance, the Lane of Lovers, the Path of Passion, the Walk of Wonders, or the Trail of the Tantalizing.
It might be called all of those, but it isn’t—ah, a better title: “Cupid’s Corner.”
There the little lad of love stands directing his traffic without a jam. The gears of human mesh perfectly under his skillful guidance. His clutch seldom slips. It’s different in this land of Love. Those who pass in the night feel the sting of his sharp arrow.
You wonder where this strange place is?
Only true lovers find it.
But this one, this weird avenue, street, or whatever it is, happens to be in Hollywood.
The extras talk of it, the prop men wonder about it, the stars (some of them) know all about it. Ingenues crave it. So do the flappers. And the debutantes—if any.
Those who talk a la bordelaise says it’s all a fake. Popin’ jays never believe in that sort of thing. Stenographers with shell-rimmed glasses turn deaf ears to talk of it.
Men over sixty have other thoughts.
Women up to ninety dream about it.
Shop girls are thrilled at the thought of it.
Clerks and salesmen in off moments have visions of—it.
What is this mysterious thing?
Stories of its existence are true. Those who have visited “Cupid’s Corner” vouch for the assertion.
One little leading lady of the films, who recently married a famous cinema comedian, said:
“It’s a little side street—and dark, except for a yellow moon peeping through the drooping pepper trees. A beautiful silhouette. Awfully romantic. There is a tiny brook when runs under the dusty road. Its trickles are in rhythm with a violin softly playing—playing most anything. Love Tales, maybe.
“There is a cute little white bungalow something like a miniature of George Washington’s Mount Vernon home. A single light over the wrought iron gate. The moon through the long windows in front expose two heads above the comfy divan. One is black and shiny. The other is blonde and bobbed, with curly ringlets.”
Another lady spoke. This time a star. She just returned from Europe, where she made a famous story produced by an American company.
She is of the vampire or siren type. Her lips, which fairly drip with redness, illuminate danger for those who touch.
She, too, had heard the snap of Cupid’s Bow.
“The stucco abode across the road is perfectly darling! It is painted green. A rose vine with pink buds climbs at the corner. Moss between the house and stucco fence instead of grass. A wee patio with bubbling fountain. Honeysuckle along the side. French windows with hand painted drapes. A lighted floor lamp. A young man stretched out full length on the floor reading aloud. A pretty girl listening on the chaise lounge. A baby coos in its crib by her side. My idea—“
Footsteps along the dusty road. Two pairs of them. Softly . . .
Silence.
The moon turns on a little more power. The stars twinkle roguishly. A faint perfume of flowers. Whispers. A soft breeze. A rustle of the leaves.
Leather treaded on the wooden bridge. The padded pat of shoes in the dust again. A slight incline. A rustic bench of small limbs between the larger V-shaped limbs of a tree.
A girl with blue eyes that sparkle, in organdie. A boy in grey flannels with dark coat and tanned face. Whispers. Lips that tingle—that thrill. Pressed as one.
Silence lingers in the warm breeze.
Whispers. A caught breath. A nodded fluffy head. A muffled exclamation. Hugged bodies. A smile that speaks victory. A hurried search of coat pockets.
A bit of circled platinum. With stone that sparkles like blue eyes. A tiny gasp. The circle on a white finger.
Whispers.
Slow steps in the dust. Darkness. A cool wind. A moving hug. A sudden stop. Lips that tingle—that thrill. Whispers. The gay trickles under the wood bridge.
The moon sighs. The stars laugh with a flicker. The trees move with sadness. Left alone. The flowers sing in redolence.
A few hours later. All is gone. There is noise. The baby cries. A young man makes a hurried dash for a departing street car. The sputtering sound of a cold motor. The aroma of steaming coffee; of eggs. A rattle of milk bottles.
A hasty grab for the morning papers. Another dry raid. The comic section with coffee.
At noon the news spreads.
“Did you see the ring?”
“Isn’t it wonderful?”
“I always thought they would be married.”
“Well, they are a marvelous pair.”
Amid the rush of hurrying workers, those in the profession stand on the corners talking. Some in the middle of the sidewalk reading a printed article in the late afternoon paper.
They read:
“— — —, well known motion picture actress, has announced her engagement to — — —, who has earned a reputation as a player of juvenile roles for the — — — Pictures Corporation.
“And etc.”
Now you see what happens to those who find—
“Cupid’s Corner.”
If you enjoyed this post, please consider
supporting Cladrite Radio on Patreon