365 Nights in Hollywood: Bunk Boulevard ⋆ Cladrite Radio
Skip to content
Jimmy Starr began his career in Hollywood in the 1920s, writing the intertitles for silent shorts for producers such as Mack Sennett, the Christie Film Company, and Educational Films Corporation, among others. He also toiled as a gossip and film columnist for the Los Angeles Record in the 1920s and from 1930-1962 for the L.A. Herald-Express.
Starr was also a published author. In the 1940s, he penned a trio of mystery novels, the best known of which, The Corpse Came C.O.D., was made into a movie.
In 1926, Starr authored 365 Nights in Hollywood, a collection of short stories about Hollywood. It was published in a limited edition of 1000, each one signed and numbered by the author, by the David Graham Fischer Corporation, which seems to have been a very small (possibly even a vanity) press.
Here’s “Bunk Boulevard” from that 1926 collection. 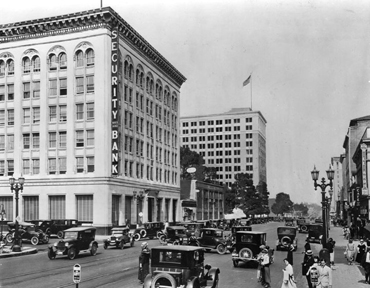 Hollywood Boulevard. . . .
Late afternoon. Women shoppers with tiny beads of perspiration on once powdered noses. Magazines used as fans. Coatless men. Heat waves make a pale blue haze come from the black asphalt. Car tracks glisten in the sun.
Cahuenga Avenue and Hollywood Boulevard . . .
The Forty-second and Broadway of the movie village. A thin man, coatless,but with open vest, smelling of sweat, shouts from across the street:
“Joe, didja’ get me that gang for th’ night shot?”
“Yeh,” comes the hasty answer from someone in the movie crowd.
The thin man scuffs from sight around the corner.
The sun is tired. As it sinks a shadow remains. Shop owners crank up their awnings.
Seven giddy schoolgirls with books and papers make a sudden loud entrance into the drug store. There is a rush for the cosmetic and soda counter. Some believe in interior decorating first.
Four tall glasses with syrup concoctions slide along the marble counter.
One with pimples on her forehead sucks hard on the chocolate in the bottom of the glass.
A rosy-cheeked youth enters in striped flannels.
Five pairs of sparkling eyes greet him.
His cheeks become redder and his chest swells a bit—and probably his head. He has no hat for a test.
There are muffled giggles, and the girl with the prominent teeth lisps something.
A fat lady with a rabbit neck-piece fanning herself with a theatre program has difficulty in getting on the high soda stool.
More giggles.
The youth pays the cashier for a stick of pink make-up.
A man with checkered pants and gaudy shirt calls for a “cherry-coke.”
There is almost a cool breeze outside.
A flivver truck with steaming radiator skids around the corner. The driver dumps out stacks of green evening papers.
Instantly familiar newsboy shouts pierce the hot silence.
A long, heavy under-slung street car rumbles to the corner and stops, discharging groups of high school students.
The screaming brakes on a taxi cab, the sound of sliding rubber on warm pavement, a tiny girlish squeak, a muffled scream of the fat lady and he hoarse cry of the crippled newsboy.
A crowd collects from nowhere. Girls shut their eyes—afraid to look.
A man picks up an unconscious girl. A small boy gathers up her books and papers. Her rolled socks show as the man carries her to the curb.
Bloods drips from her rouged lips. Her tinted cheeks have lost their color.
The man carefully sets her down and grasps her ankle. There is a cry of pain. More blood from her mouth.
A sound of fire engines. Some one has turned in a fire alarm. The girl is muttering incoherently.
There are snickers and a burst of laughter as the firemen arrive with their oiled slicker and hatchets.
A nice lady explains to the firemen.
The acting fire chief lifts the girl into his roadster. The man explains that it is only a broken ankle. A siren gives forth a ghastly howl. A roar of the motor exhaust.
The newsboys cheer at the departing car.
The crowd goes on its way. A few linger to explain to newcomers.
Dusk . . .
Another edition of the papers arrive. Another loud howl.
“Another movie scandal!”
“Movie actress kills herself!”
There is a rush for the newsboy. He rattles coins in the leather pouch on his side.
A tourist eagerly grabs a paper and waits for his change of two cents.
An under-study paper kid laughs.
The tourist reads:
“Actress Kill Self!”
“Hope Mason, pretty motion picture actress, took her own life this afternoon in her room at 1512 Vine Street, by taking poison.
She was found dead in her room by May Zion, the landlady, when she went to call Miss Mason to he telephone.
A note was left which read:
The tourist sighed. The first light on the boulevard flickered into life. He walked toward Vine Street.
The grey dusk disappears. The lavender of early evening on the hills is like a purple robe embroidered with yellow silk as the street lights appear.
It covers the royalty of film kings and queens.
Illuminated signs of many colored bulbs flash.
Motor headlights appear like hug bugs running on a polished floor. The hum of treaded tires—like the scratching of clawed animal feet.
Squawlking horns sound danger for those in the path of rushing metal.
An old man with stooped shoulders and nose glasses, in a light overcoat, stands at the corner munching brilliantly colored gum-drops.
Pola Negri rides by in a large maroon-colored limousine.
Dark . . .
The dishes clatter in harmony with the incessant chatter in Henry’s.
A busboy in the window butters hot rolls with a cloth on a stick over the hot plate.
Charlie Chaplin, with head down, walks in unrecognized. He sits at the last table in the rear, where a red-headed chap with pug nose is sitting at the midget piano.
Some call it wild Hollywood, but— It’s just “Bunk Boulevard!”