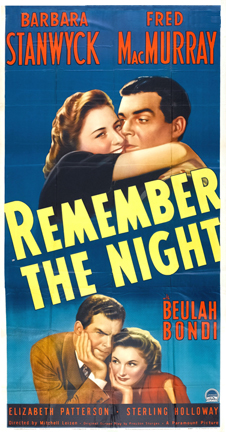 Remember the Night finds Fred MacMurray portraying an ambitious assistant D.A. in NYC who finds himself with shoplifter Barbara Stanwyck on his hands because he has asked for a delay in her trial, so as to avoid the jury feeling any holiday-inspired sympathy for her.

It’s a favorite of ours, a picture that deserves much greater fame and acclaim that it has been afforded. Turner Classic Movies has teamed with Universal to offer it on DVD, but if you’d like to try before you buy, it’s airing on TCM on Tuesday, December 12, at 9:45 p.m. eastern. Set your DVR now and give it a look; you won’t regret it.