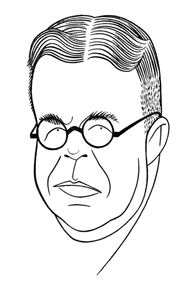 He is a tiptop cook.
There never will be an exact count of how many plays he wrote. He wrote at least three hundred. Between the ages of twenty-seven and forty he remembers nothing but writing plays. Somehow, between scripts, he managed to get married. Also to raise a family. Didn’t notice either until he was forty. Then took up golf.
He knows much more about a lot of theatrical managers than they care to have him know.
Had a unique contract with A. H. Woods. It stated that for a period of five years he could write plays for Woods only. Also stated that during that period Woods couldn’t produce any plays but his. During those years he wrote fifty-eight melodramas, or a play a month for five years.
He’d go to Europe tomorrow if they’d build a railroad across the Atlantic Ocean.
He doesn’t drink. He’d like to.
Is a Harvard graduate. Played football on the Crimson eleven. Also held that college’s record for the hundred-yard dash until four years ago.
In those days of the thrilling melodramas Woods would select a title and order terrifying lithographs of maidens in peril. Then Davis would write a play to fit both the title and the picture.
Perhaps you recall some of them. They include such titles as Through the Breakers, Deadwood Dick’s Last Shot, The Chinatown Trunk Mystery, Confessions of a Wife, The Gambler from the West, Tony the Bootblack, The Great Express Robbery, Queen of the Opium Ring, Convict 999, Broadway After Dark, The Policeman and the Millionaire’s Wife, The Creole Slave’s Revenge, A Chorus Girl’s Luck in New York, and Edna, the Pretty Typewriter.
He doesn’t remember writing Bertha, the Sewing Machine Girl, although he is credited with it.
His play Icebound won the 1923 Pulitzer prize. The Detour he considers his greatest play.
Always smokes cigars. At rehearsals he makes a little cup from a newspaper to flick his ashes in. He is well house broken.
Clarence Darrow is his idea of the greatest American.
Prefers the theatre to the movies, ices to ice cream, a four-in-hand to a bow tie, a cold bath to a hot one, poker to bridge and a wicked woman to a simple one.
The first theatrical flashlight ever made was of his play The Road to Paradise. It is now pasted on the wall of his workroom. Among those in it are Mrs. Davis, then the “You Ain’t Done Right by Our Nell” girl. And George Jessel‘s stepmother, then very interested in keeping the villain from foreclosing on the old homestead.
Wrote his first play, The Rival Detectives, at the age of eight. All the characters in it were murdered.
His ambition is to have a perfect script after the first writing. Thought he had it with The Nervous Wreck. Then had to rewrite it seven times.
Once was turning out so many plays that he had to write under seven different names. Two of the nom de plumes, Robert Wayne and John Oliver, became well known. In fact, a Pittsburgh dramatic critic wrote a piece about John Oliver stating that “at last a man had come along to drive Owen Davis out of business.”
Eugene O’Neill is his favorite playwright.
When writing he moods himself to the play. While working on Chinatown Charlie he lived on chop suey.
The first wedding he ever attended was his own.
Give him a hundred hours and he’ll have a play written, cast and ready for rehearsal. The Donovan Affair took a week to write; The Detour a month; Icebound a year; Chinatown Charlie an hour. He wrote nine third acts for To-night at Twelve on the train to Atlantic City.
The only army he’d fight for is the Salvation Army.
When it comes to humorists he hands first prize to Frank Sullivan.
Every opening night he hangs about the lobby listening to the comment. If it is unfavorable he hurries home, and before the reviews have been published he is at work on another play.
in the beginning he took criticism seriously. He knocked out the critic—and with one punch—who panned his first production.
Is a tremendous pie eater. Every morning for breakfast he has two kinds of pie.
While working for a prominent picture concern, that company sent a form letter to all their authors and stars saying that a ten per cent reduction of salaries was going into effect. They hoped that this reduction would be approved by all those who really loved the movies. Why, even the executives had agreed. To this charming letter Mr. Davis replied: “I appreciate your sentiment in taking a reduction because you loved the movies. As for myself, however, I must beg you to continue my contract because I hate the damn pictures.”
He is tone deaf.
His first play he submitted to the Charles Frohman office. Charles Klein, author of The Lion and the Mouse, was the playreader then. After reading the play he said: “You look like a strong man.” Davis proudly replied that he was. “Well, then,” said Klein, “take this masterpiece and throw it as far as you can, and never write another.”
If you enjoyed this post, please consider
supporting Cladrite Radio on Patreon