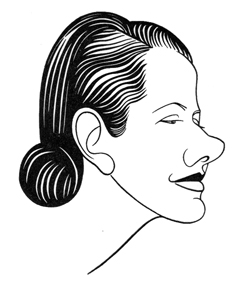 Was born in London. Her name was Lily Louise Fontanne. Changed the Lily Louise to Lynn because it sounded better.
Every morning for breakfast she has honey and rolls.
She has a wide smile, a throaty laugh and a robust sense of humor.
Lives in a triplex apartment in East Thirty-sixth Street. The pride of the apartment is a fireplace with an aluminum background. The telephone operator there has a list of the people she will speak to.
A woman, above everything else, she believes, should be fashionable.
During the World War she worked in London as an emergency chauffeur.
She met Alfred Lunt, her husband, during a rehearsal of Clarence. Entering to speak his lines to her, he tripped and fell at her feet. It could be said that he fell for her. Later he suggested that they rehearse in the open air. He took her riding in an open carriage through the park. He gave their scripts to the driver to read while he proposed to her.
Dislikes short dresses and never wore them when they were the style. Wears a blue smock in her dressing room or when idling around the house.
She can foot pedal an Ampico piano longer and better than anyone in this state.
Avoids going to parties. Always giving the same excuse: “I’m too tired.” An actress, she insists, should keep away from her public. She is fond of dancing but seldom does.
After the opening performance of Strange Interlude she slept for fifteen hours.
Her husband’s pet name for her is “Rich Lynnie” because she is always saving her money.
Doesn’t like tinned food and people who rub their hands together. Hates to wear stockings but does. Like to wear jewelry but doesn’t. Hates to write letters and seldom does.
When traveling she brightens up her hotel room with chintz curtains and window flowers which she buys at Woolworth’s.
Her great ambition in life is to be a writer of critical essays.
Changes her perfume weekly. Claims a change of perfume is a change of attitude.
Two years ago, knowing that she was to be operated on for appendicitis, she played through an entire performance against doctor’s orders. Her substitute wasn’t ready. And she didn’t want that show to miss a performance.
Other people call her husband by his nickname, “Bill.” She always calls him Alfred.
She visited her home town, London, last summer for the first time in ten years. She went into a glove shop. The clerk greeted her with: “Oh, how do you do. So glad that you’re back. You’ve been acting out in the colonies, haven’t you?”
Her favorite dish is broiled scallops.
She changes her coiffure for every show.
Among the great English writers she knows personally are Shaw, Wells, Bennett and Kipling. Met Bernard Shaw and Mrs. Shaw last summer. Mrs. Shaw spoke to her about curtains. Bernard went in to trim his beard.
She likes all foods that aren’t good for her. Her husband is always putting her on a diet.
Ellen Terry gave her her first lessons in acting. This consisted of winding a bed sheet around her with the train in front. Then she had to walk up and down the room until she could handle the train gracefully.
Of all the books ever written her favorite is Arnold Bennett’s Old Wives’ Tales.
Charlie Chaplin once mistook her apartment for a speakeasy. And her for the proprietor because she was so hospitable.
Costumes and makeup are as important to her as performances. Spends as much time perfecting these as she does rehearsing her part.
Men, she claims, should wear more gay colors.
Believes that no woman should ever be separated from her husband for more than a month. Her contract with the Guild provides that she and Mr. Lunt must always be playing in the same city—if not in the same play.
She loves to chat with taxi drivers. She learns things.
She hates to get dried after taking a bath.
If you enjoyed this post, please consider
supporting Cladrite Radio on Patreon