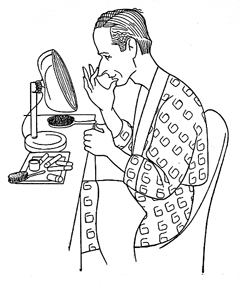 He is nearsighted and wears glasses at all times, except when acting and reading.
His father was a stock broker. When he was graduated from Dulwich School, London, he had to work as a clerk in a bank. When the war broke out he joined the army to escape from this existence.
Never eats any meat because he dislikes eating animals. Eggs are his favorite dish. He often eats eggs three times a day.
Was “invalided” out of the army in 1918. Later that year he made his London theatrical début in Pinero’s play The Freaks. It opened during an air raid and lasted only six weeks.
He was the first member of his family ever to appear on a stage.
Hates the accepted style of fashions for men. Wearing trousers, collar and tie annoys him. He is happiest when in the country. Then he wears short pants, no socks, no tie, sandals and a beret.
Is not an impromptu person. He must think about a thing before he does or says it.
Has a great intuitive sense about plays. When allowed to make his own selection he has always picked a hit.
His passion is languages. He would like to learn every language. He speaks English, French, German and American.
Only knew his wife, Ruth Martin, three weeks before they were married. They eloped. He was a soldier at the time. He was given an hour’s leave of absence. Two scrubwomen in the church were the witnesses. After the ceremony he went back to the war.
Has two children. One a boy, Ronald, age eleven. The other a girl, Leslie, age five. Ronald is in school in London. Leslie is here with him.
The only sports that interest him are the three in which he indulges. He is fond of horseback riding, playing tennis and swimming in warm water.
Made his American début in 1920 in Just Suppose. After that he had the ill-fortune to appear in a number of failures. Speaking of that dreadful period a person recently said to Mrs. Howard: “Every first night I went to I saw your husband.
Wears a guard ring on the pinkie of his right hand. It has never been off that finger since it was given to him by his mother when he was sixteen.
He has two sisters, Irene and Doris. Has two brothers, Arthur and Jimmy. He hasn’t seen Jimmy, who is now somewhere in the wilds of Africa, for the last ten years.
His ambition is to be an author. He wrote one play, Murray Hill, and articles that have appeared in the New Yorker and Vanity Fair. He doesn’t like acting.
Autumn shades are his favorites. Every tie he owns is brown or red. Every suit is a gray flannel or a brown tweed. When he buys a new suit it looks exactly like the one he has discarded.
At the age of sixteen he pulled a Noel Coward by writing the book, music and lyrics of a play called Mazie’s Diplomacy. He plays piano by ear.
Two years ago his wife was very ill and underwent a serious operation. When she recovered he presented her with a Victoria Cross, which he bought in a pawnshop. “For Valor” was inscribed on it. It is her proudest possession.
He never drinks coffee but has buttermilk with every meal.
Is very keen about good music. He likes to hear a good symphony concert, but seldom attends the opera. He doesn’t think the human voice can do justice to music.
His daughter says she is going to be an actress. His son dislikes the theatre and has never seen him act.
He draws well. A year ago he attended an art school with Alfred Lunt. One day they had to draw from life. The model was late. Suddenly she appeared—nude. He was so embarrassed that he couldn’t look at her. When the instructor looked at Howard’s drawing board he found only a mess of lines.
His hobby is photography. Has four expensive cameras and a motion picture camera. He has a pictorial record of every place he has ever visited.
The greatest book ever written, he considers, is Somerset Maugham‘s Of Human Bondage. The finest of all plays, Richard III. His one theatrical desire is to play Richard.
Always wears a chain around his neck from which dangles an English coin. It was sent to him by his wife. He received it the opening night of Her Cardboard Lover. That evening the gallery stood and cheered him, an unusual occurrence in the American theater. It’s been his luck charm ever since.
If you enjoyed this post, please consider
supporting Cladrite Radio on Patreon