Times Square Tintypes: George Gershwin ⋆ Cladrite Radio
Skip to content
In this chapter from Times Square Tintypes, Broadway columnist Sidney Skolsky profiles George Gershwin, who then cast one of the longest shadows over Broadway.
By 1932, when this book was published, Gershwin had written most of the orchestral works that remain so celebrated today, including Rhapsody in Blue (1924), Piano Concerto in F (1925), An American in Paris (1928), and The Second Rhapsody (1931), and had experienced great success on Broadway with such shows as “Oh, Kay!” (1926), “Strike Up the Band” (1927), “Funny Face” (1927), “Girl Crazy” (1930), and “Of Thee I Sing” (1931). 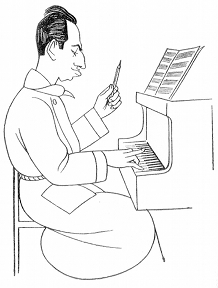 He loves to go shopping. Is always buying presents for friends.
Suffers from indigestion. Every night before retiring he takes agar-agar, a new medicine.
Was born in Brooklyn, September 16, 1898, and came to this country at the age of six weeks. Has two brothers, Ira and Arthur, and one sister, Frances. As a youngster he was the champion roller skater of his neighborhood.
Smokes a cigar out of the side of his mouth and wears a high hat gracefully. He didn’t start to smoke until he was twenty.
His father, Morris, because of his unconscious humor, is the life of his Gershwin parties. Morris has been designer of fancy uppers for women’s shoes, owned several cigar stores, owned a billiard parlor, owned a Turkish bath place and was a bookie. Morris also entertains by imitating a trumpet.
Took his first piano lesson when he was thirteen. At sixteen he was working for Remick’s. His boyhood idols were Jerome Kern and irving Berlin.
The thing he values most is an autographed photograph of King George of England. It bears this inscription: “From George to George.”
He wrote his first song when he was fourteen. It was a nameless tango. His second composition (now he had learned to title them) was “Since I Found You.” It was never published. His first published song, “When You Want Them You Can’t Get Them And When You’ve Got Them You Don’t Want Them,” he sold to Harry Von Tilzer for five dollars.
Twice a week he visits an osteopath.
Hates cards. His favorite game is backgammon. Occasionally he shoot craps.
He once worked as relief pianist at Fox’s City Theatre. Was fired because an author complained that he didn’t know how to play the piano.
An English publisher sends him copies of rare and first edition of such authors as Galsworthy, Shaw and Barrie in return for an occasional song.
His first piano teacher, whose memory he cherished, was Charles Hambitzer. His present teacher is Mme. Boulanger in Paris. The first time he went to Paris to study he came back with a trunkful of shirts and ties. On his last trip he returned with a $10,000 organ which he has yet to unpack.
Hard liquor doesn’t appeal to him. He likes a glass of real beer. After more than one cocktail his eyes begin to shine.
The first long piece he ever wrote was not “The Rhapsody in Blue.” But one called “135th Street.” It was performed by Paul Whiteman in the Scandals of 1921 for one performance only. It was taken out because it was too sad.
He is very particular about his clothes which are made to order. Even when he made only $25 a week he spent $22 for a pair of shoes.
Writes whenever the mood seizes him. He may have just returned home after a party and still attired in his evening clothes he will sit down at the piano. Or he may compose wearing pajamas, or a bathrobe—or even nude.
He is physically very strong. Especially his arms which are powerful. He is a swell wrestler.
His brother Ira writes the lyrics for his songs. Before, Irving Caesar and Buddy De Sylva had the honor.
“The Rhapsody in Blue” was played for the first time, February 12, 1924, at Aeolian Hall. It took him three months to write it. It took him eight months to write “An American in Paris.” His first real popular hit was “Swanee.” This was written for the revue that opened the Capitol Theatre.
Is bashful about playing the piano at parties. He has to be coaxed. Once he starts, however, you can stop him. He says, “You see the trouble is, when I don’t play I don’t have a good time.”
In the volume called Great Composers As Children he is the only living composer listed.
One evening the family discussing the new Einstein paper. George expressed his surprise at the compactness of the scientific vocabulary. He said: “Imagine working for twenty years and putting your results into three pages?” “Well,” said Papa Gershwin, “It was probably very small print.”
Whenever his sister Frances has an audition for a job he goes along and plays the piano for her.
His two favorite places are Dinty Moore’s and his mother’s. At Moore’s he generally orders vegetable soup, double lamb chops and rice pudding.
At his mother’s he is fond of cold bortsch.
He is always saying: “I don’t do enough work.”
When rehearsing a new show he spends hours singing his songs to the chorus.
Victor Herbert once offered to teach him orchestration but died. He studied at Columbia for two months. Then quit. Everything he knows about this he taught himself.
When in Vienna last year a party was given for him. The chef was ordered to make blue ice cream in honor of the “Rhapsody.” This couldn’t be done so the ice cream was served with American flags.
He has a bit of the Puritan in him. If he sees his sister sitting with her dress above her knees, he pulls it down.
He has a secret passion to be an actor.
If you enjoyed this post, please consider
supporting Cladrite Radio on Patreon