In 1880 a wide-eyed immigrant walked down the gangplank of a steamship and stepped into America. His only possessions were fifty dollars and dreams. Today he wears eyeglasses and the shower in his office has gold faucets. His name was and still is CARL LAEMMLE. 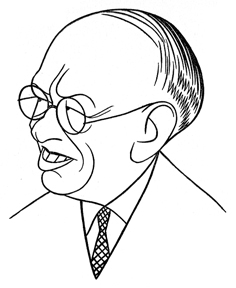 He is stocky but only five feet in height. Is known as the smallest giant in the motion picture industry.
Was born in Laupheim, Germany. Today he owns the seal of the city.
Almost every important motion picture star has worked for him at some time or other.
He had left the clothing business. Was about to open a “five and ten cent store,” when the crowds going into a nickelodeon attracted his attention. The man who formerly lectured on the fineness of buttonholes entered the motion picture business February 26, 1906. He opened the White Front movie house, admission five cents.
Is very kind and good-natured. In the middle of heart to heart talks, a favorite pastime with him, he always manages to say, “Isn’t it a pity that we can’t all be pleasant?”
Is proud of the fact that he made the first million-dollar picture, Foolish Wives. While it was being made he had no idea it would cost that much.
His hobby and the distraction of all his associates is his wholesale importation of relatives and friends from Germany. They are immediately given jobs in the home office, Universal City and the various branches. It has been estimated that if he were to put them on a pension of a million dollars annually he would be saving a fortune.
He talks with a German accent but uses correct grammar.
Is always taking some medicine for some imaginary ailment. His doctor told him to walk for exercise. He does. But he has his car trail him. After a two-block walk, he rides feeling just like an athlete.
He loves to be called “the old man” and “Uncle Carl.”
He never personally breaks his promise.
In Universal City general managers are changed to rapidly that they are known as “the officers of the day.”
His favorite eating places are Lindy’s in New York and Henry’s in Hollywood. Both are exactly alike. His happiest moments are spent there with a napkin tucked through the armholes of his vest and a plate of sauerbraten before him.
He never sits through an entire picture. Often falls asleep in the projection room. Has a committee in New York who tell him about the pictures being made on the West Coast.
Is very proud of his home town. Makes all his employees donate their old clothes. Sends them to poor people there. It’s known as the Laemmle-Lauphem Fund.
The part of a picture that interests him most is the title. Will discuss the title and take suggestions from everybody, including the butcher boy.
He never meets a prominent person without having the camera click.
Is a marvel with figures. Can tell you offhand how much they did in Siam the second week four years ago on any picture.
Has a special book in his office in which he makes his employees write what they think of him.
As the organization meeting nearly everyone wanted his name to be the name of the film company. Somewhat disgusted, he looked out of the window. Saw a white horse pulling a wagon labeled “Universal Pipe Fitting Company.” He named it “The Universal Film Manufacturing Company.”
His office must be larger than anyone else’s. His desk is made to order so he can reach it. Sits with one leg dangling over the arm of a gros-point chair. The office contains polished mirrors, two-toned taffeta draperies and looks like a boudoir.
To show his patriotism during the war he produced The Kaiser, The Beast of Berlin. This picture provoked such bitter feeling in Germany that the next time he visited Laupheim he had to run out of the town in the middle of the night disguised as a woman.
The last person to have his ear is the party whose advice he follows.
A man tried to sell My Sweetheart, an old-time favorite play, to him for a talkie. “What kind of play is it?” he asked.
“A pastoral drama,” the man replied.
Laemmle thought for a moment and then said: “I don’t think I can use that play. I don’t like to put preachers in my pictures. It’s bad for business.”
He likes to wear red carnations in his lapel.
His greatest accomplishment was breaking the motion picture trust, making it possible for independents to produce.
Fought the trust for over two years. The day before the United States Supreme Court was to render the decision he was called out of town on business. Left word for his lawyer to let him know the result immediately. Elated over the victory the lawyer became dramatic and wired: “Justice Triumphs.” To which Laemmle immediately wired back: “Appeal At Once.”
If you enjoyed this post, please consider
supporting Cladrite Radio on Patreon