The hands have it ⋆ Cladrite Radio
Skip to content 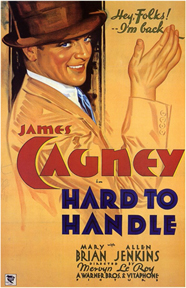 We have a theory that goes like this: Old movies and foreign films have something key in common. Even if the picture is a pedestrian one — so-so script, by-the-numbers direction, hammy acting — it still serves as a form of escape.

When watching an old movie, one experiences another time, a different way of speaking and thinking. We love watching for the sort of details that shed light on life as it was lived back then—the fashions they wore, the slang they used.

One thing we particularly watch for when watching Thirties movies is gesticulative salutations—the kind of hand gesture that can alternately mean, “How’s tricks, pal?” or “So long, sister!” (kind of like the word “aloha” in Hawai’i). James Cagney‘s demonstrating just such a gesture in the movie poster on the right.

Dick Clark has typically used one of these gestures when he signs off at the end of a television program. As we recall it, Clark holds two fingers up (as if to signal, “Two more, please, bartender”), places those two digits on a spot between his upper forehead and his temple, and then briskly points those two fingers outward with a flick of the wrist.

There are many such gestures in old movies, and we have come to appreciate the subtle differences between them. Our favorite, which we have dubbed the “Hiya Chum!,” is difficult to describe without breaking it down, but we think we can help you perform it if you’ll closely follow our directions. We regret to say we don’t remember who it was we saw perform this gesture or even which movie it was in, but we remember the gesture quite clearly, which speaks to its effectiveness, we think. 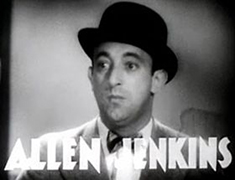 We do remember the character as the sort of wisecracking second banana that Allen Jenkins assayed so effectively in so many pictures, so imagine him performing the gesture we’ll describe below, if it helps.

As we recall the scene, the leading man and woman are making their way down a corridor when the second banana passes going the other direction. He makes the alluded-to gesture, says something snappy like “Hiya kids!” and continues along the corridor.

Now, the gesture (and, yes, you may try this at home—in fact, we insist you do):

First, breezily swing your right arm (or the left, it doesn’t really matter) as if to shake someone’s hand but continue the motion until your arm is at shoulder height. The elbow is jutting forward, the upper arm is parallel to the ground, and the forearm is pointing due north at a 90% angle. Your wrist should be bent, so that your palm faces downward and your fingers point back at your face.

Now, with a flick of the wrist, flip your hand outward from its palm-down position to a palm-up position, as if you were a waiter carrying an invisible tray of drinks.

We’ve broken it down into parts so that you can give it a try, but with a ilttle practice, all those parts should meld into one smooth gesture. And don’t forget the insouciance, and plenty of it!

Practice this gesture in the privacy of your home, and when you can toss it off as if it’s second nature to you, spring it on your friends.

We can assure you that the fellas will think you swell, and the dames will go dizzy for you.