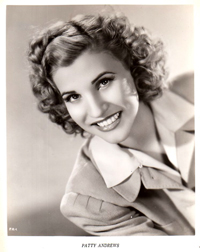 For those of us with a fondness for the popular culture of the Cladrite Era, the loss of a beloved star is especially painful. There just aren’t all that many performers still with us who entertained audiences in the 1920s, ’30s, and ’40s.

And let’s face it, whether or not she was still performing, the world was simply a better place with an Andrews sister still among us. But alas, the last living member of that storied vocal trio, Ms. Patty Andrews, passed away on Wednesday at the age of 94.

Patty, the youngest of the three sisters, was a soprano and the trio’s lead singer. Maxene, the middle sister, handled the high end of the harmonies, and LaVerne, the eldest, sang the low end.

They were signed to Decca records in 1937, and their second record gave them their first hit, “Bei Mir Bist Du Schön (Means That You’re Grand)” (it was the flip side of “Nice Work If You Can Get It,” which the record company expected to be the hit).

The Andrews Sisters went on to sell 75 million records before they broke up in 1953 (Patty wanted to pursue a solo career). They reunited in 1956, but the sound of popular music had changed and their moment had passed. LaVerne died in 1967, breaking up the act for good.

They were the children of immigrant parents, a Greek father (whose family name, Andreos, he changed to Andrews) and a Norwegian mother.

What great joy Patty and her sisters brought to the world over a 19-year period. The list of their hits is a long one, and choosing a few to share with you below wasn’t easy. But we urge you to give these few hits a listen and then perhaps track down a greatest hits collection or two. There’s no better way to remember Patty Andrews than to set your toe a-tapping to the delightful music she and her sisters made more than 60 years ago.

Rest in peace, Ms. Andrews, and thanks.

Beat Me, Daddy, Eight to the Bar

There’s something about knowing an icon of the past is still with us that warms the ol’ Cladrite cockles. It doesn’t matter if the person is no longer churning out records or movies or books — being reminded of the very fact that they’re still around is sufficient to make all seem right with the world, for just a little while.

The opposite holds true, too, of course. We remember all too well how empty life seemed after the passing of one of our personal favorites, Groucho Marx, back in 1977, and the loss of Jimmy Stewart and Robert Mitchum, just a few days apart in 1997, felt like a double punch to the gut. There was just something better about a world with those guys in it, and we took their passing pretty hard.

So, why not take a moment today to celebrate the fact that Ms. Patty Andrews, of the irreplaceable Andrews Sisters, is not only still with us, she is, in fact, celebrating her 92nd birthday today.

Regular listeners know that we frequently play Andrews Sisters recordings on Cladrite Radio, but we’re sharing one of our favorites of their hits below, so you can give it a listen and raise a toast — a rum and Coca-Cola might be a good choice of beverage — to the birthday gal.

Beat Me, Daddy (Eight to the Bar) — The Andrews Sisters