In this installment of Snapshot in Prose, we pay a visit to Ozzie Nelson and his then-future wife, Harriet, in 1935, when they were performing together and hotly rumored to be an item behind the scenes. Ozzie, then unmarried, was a very popular bandleader and singer, and Harriet was his girl singer, a married woman (though not for long) awaiting her final divorce decree.

Ozzie and Harriet went on to huge television success in the 1950s, of course, and it’s for “The Adventures of Ozzie and Harriet” that they’re best remembered today. But it’s intriguing to revisit a time when they were recording stars, and hadn’t yet tied the knot.

As we learn from this story, from the June 1935 issue of Popular Songs magazine, they were both considered heart-throbs in their day, and one can’t help but wonder what advice they offered their son Rickie in the 1950s, when his star rose so suddenly and he became a teen idol. 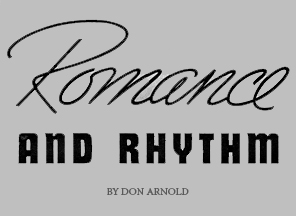 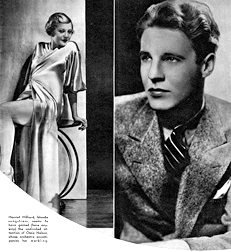 It seems inevitable that Ozzie Nelson and Harriet Hilliard should meet and fall in love. Their romance of the past two years had Broadway agog, but the principals, themselves would rather discuss almost anything else.
Why? For several reasons. One of them is said to be that Harriet has not yet received her final divorce papers from an almost mythical, out-of-sight, out-of-mind husband which she seems to have acquired somewhere, sometime; another is that too much attention of their interest in each other might slow down the millions of debs who regard Ozzie with wide eyes of admiring wonder and the college boys who flock nightly to the ringside tables wherever Harriet is appearing.
Both Ozzie and Harriet might be called grown-up child prodigies who, contrary to general rule, made good. A cursory glance at Ozzie’s record will suffice to show that musically and romantically he was destined to be a leader.
He was born in Jersey City, New Jersey, in March, 29 years ago. He was christened Oswald George Nelson but there is no record that during his school days he was taunted with cries of “Oh Os—wald!” from his companions, for he was too rugged a lad to inspire such comment, and the consequences were feared.
Ozzie was the youngest Eagle Scout in the United States when he was 14, in 1920, and when the Boy Scout Jambouree went to Europe for the Olympic games, he and his brother sang together before King Albert of Belgium.
END_OF_DOCUMENT_TOKEN_TO_BE_REPLACED